Monsieur de Norvins had recently been appointed Chief of Police in Rome when Ingres painted his portrait in 1811. He is presented as a reserved, even forbidding, figure who closely scrutinises us as we look at him. Norvins’ loyalty to Napoleon is indicated by the gesture of placing his left hand inside his jacket, just like the Emperor.

However, following Napoleon’s fall from power in 1814 and the restoration of the monarchy, any overt evidence of loyalty to him would have been potentially damaging to both Norvins and Ingres, which led Ingres to make some changes. He added a length of red drapery to conceal what was probably a bust of Napoleon’s infant son, the King of Rome, which you can now see as a ghostly presence if you look closely at the left of the picture. As if to compensate for the lost bust, Ingres added a bronze sculpture of the Roman goddess, Minerva, on the right.

At first glance, the rather formal pose and opulent setting might suggest this is a portrait of a wealthy individual or perhaps an aristocrat. But as is often the case with Ingres, there is more going on in this painting than might at first appear. The sitter, Monsieur de Norvins, had been appointed Chief of Police in Rome (then under French rule) in January 1811, the year in which the portrait was painted. However, subsequent political events led him to make changes to it. Clues to these changes are visible in the picture – but only if we look closely.

Monsieur de Norvins is presented as a reserved and rather forbidding figure. Leaning on a chair, his pose is immovable, its rigidity echoed by the vertical line of the curtain on his right. His arms are held tight against his body, and he does not smile. Instead, his thin lips, framed by a hint of stubble, are slightly pursed, as if he is thinking or coming to a decision. His large eyes look directly at us, holding us in his sidelong gaze. Norvins’ black suit further adds to the severe mood of the painting, but it also creates a sharp contrast with the brilliant white of his collar and shirt cuffs. The only colour on his clothing is from the vivid band of red ribbon indicating he is a Chevalier of the Legion of Honour. This flash of red also picks up on the deep maroon of the damask fabric on the wall and chair. Ingres confidently displays his skill in rendering the qualities of different materials, such as the shadows in the folds of the jacket’s black cloth and the ribbon’s sheen.

Norvins was a supporter of the Emperor Napoleon – and later wrote a very successful four-volume biography of him – and his political allegiance is shown by the Napoleonic gesture of placing his left hand inside his jacket. Following the fall of Napoleon in April 1814 and the return to power of the Bourbon monarchy, any evidence of overt loyalty to the former Emperor would have been potentially harmful to Norvins’ political career and to Ingres, as an ambitious young artist. Ingres responded to this new political situation by repainting parts of the canvas. In addition to minor reworking around Norvins' collar and head, which was originally slightly higher, he painted a length of red drapery, which spills over the chair, on the left of picture. This was to hide a bust, resting on a tall pedestal, which had originally been placed in the upper left corner. The bust was most likely of the King of Rome, the infant son of Napoleon, born in March 1811. Because oil paint thins over time, the bust is now visible as a ghostly presence beneath the drapery.

As if to compensate for the lost bust, Ingres added a bronze sculpture – copied after a marble in the Vatican – of the Roman goddess, Minerva, on the right of the picture. On the pedestal beneath it, the letters ROM refer to Norvins’ position in Rome. As Ingres painted within the limited space available, both the bust and inscription are awkwardly cropped. The red wallpaper is also now clearly visible through the thin overpainting. 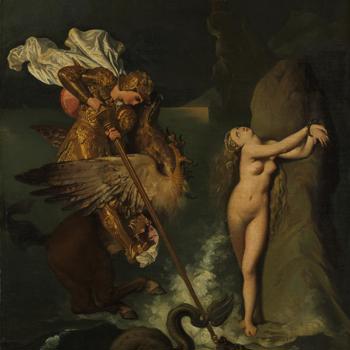 Angelica saved by Ruggiero
Jean-Auguste-Dominique Ingres
The scene shown here is taken from an episode in the sixteenth-century epic poem Orlando Furioso, by Ludovico Ariosto. The Christian knight Ruggiero has discovered the pagan princess Angelica, who has been abducted by barbarians. Stripped and chained to a rock, she has been left as a sacrifice to...
Room 45
Madame Moitessier
Jean-Auguste-Dominique Ingres
Wearing her finest clothes and jewellery, Madame Moitessier gazes majestically at us. She is the embodiment of luxury and style during the Second Empire, which saw the restoration of the French imperial throne and the extravagant display of wealth. Her distinctive pose is based upon a Roman wall...
Room 46
Oedipus and the Sphinx
Jean-Auguste-Dominique Ingres
Oedipus stands before the Sphinx, who challenges him to solve a riddle before he can enter the city of Thebes, just visible in the distance. The skull and bones at the bottom of the picture show the fate of those who have previously failed the test. According to legend, Oedipus answers correctly...
Room 45
Pindar and Ictinus
Jean-Auguste-Dominique Ingres
This small canvas mounted on panel shows two imaginary portraits of figures from Ancient Greece. The main figure, whose bearded face is shown in profile, is the lyric poet Pindar (518–438 BC). Behind him, and in shadow, is Ictinus, the architect of the Parthenon, who lived in the mid-fifth centur...
Room 45
The Duc d'Orléans
Studio of Jean-Auguste-Dominique Ingres
This head and shoulders portrait is based upon a three-quarter length portrait of the Duc d’Orléans (1810–1842), the eldest son of King Louis Philippe and heir to the French throne, which Ingres completed in 1842. Following the Duke’s death in a carriage accident in July the same year, Ingres was...
Not on display