This is one of a set of four topographical views of Venetian villas painted for John Strange, the British Resident in Venice from 1773-90.

The other paintings in the series include two views of the Villa Loredan near Paese in the Veneto region of Italy where Strange had his country residence.

Both the Villa Loredan, which he rented, and the neighbouring Villa del Timpano Arcuato (so-called because of its arched roof) belonged to the Loredan family.

Strange was a very demanding patron, and was very strict with Guardi in this commission. He required drawings and specified that he wanted topographically accurate views of these villas. Guardi was more accustomed to painting sketchier views of Venice and its canals as souvenirs for British tourists, such as his View of the Venetian Lagoon, and the commission from Strange was not typical of his usual style. The paintings in this series are testament to Guardi's versatility and ability to adapt his method to suit his subject.

(Showing 6 of 22 works)
A Caprice with a Ruined Arch
Francesco Guardi
Small figures – traders returning home from market or a fishing trip – animate this little scene, but also serve as a measure of scale, alerting us to the size of the ruins. This is an imaginary scene known as a capriccio, but Guardi took inspiration from known buildings – the arch with a suspend...
Not on display
A Caprice with Ruins on the Seashore
Francesco Guardi
This imaginary scene reflects an eighteenth-century fascination with ruins. In it, a once glorious but now ruined folly has been positioned on one of the islands in the Venetian lagoon. Two men dig energetically beside the classical arch, a scene repeated in other paintings by Guardi. He has used...
Not on display
A Gondola on the Lagoon near Mestre
Francesco Guardi
Two gondoliers wearing traditional carnival costumes propel their boat across the Venetian lagoon, their oars stirring the water, their passengers sheltered by a canopy. On the horizon, sails catch the breeze.In the distance is the tower of Malghera, near Mestre on the mainland (Guardi’s larger V...
Not on display
A View near Venice (?)
Francesco Guardi
This is most likely a view of daily life in Venice during the second half of the eighteenth century, rather than an invented capriccio, though the actual site has not yet been identified. The Guidecca, Chioggia and Murano (districts and islands of Venice) have all been suggested.Men chatting, wom...
Not on display
An Architectural Caprice
Francesco Guardi
This theatrical scene, with its stage-like setting of dramatic buildings that loom over the figures, was imagined by Guardi. The building on the left may be based on an unused design for Venice’s Rialto bridge by Andrea Palladio, a sixteenth-century architect. Guardi probably studied the design a...
Room 39
An Architectural Caprice
Francesco Guardi
Although capricci views like this one show scenes that are essentially imaginary, Guardi often used details of real buildings in his. The staircase here is based on the one in the courtyard of the Doge’s Palace in Venice, though Guardi has removed some of its statues. He also reduced the size of...
Room 39
An Architectural Caprice
Francesco Guardi
This capriccio, or architectural fantasy, is a patchwork of features taken from different buildings in Venice: the archway in the foreground is from the Torre dell'Orologio (clock tower) while the buildings and staircase beyond are from the inner courtyard of the Doge’s Palace. Guardi has exagger...
Not on display
Caprice View with Ruins
Francesco Guardi
This tiny picture, measuring only 10 by 6 cm, is framed with two other views of picturesque ruins in imaginary Italian settings (such paintings are known as capricci). One shows an elegant couple and the other depicts a man and child surrounded by soaring architecture. In the foreground of this s...
Not on display
Caprice View with Ruins
Francesco Guardi
This is one of three tiny pictures that have been grouped together since the early nineteenth century (the others show a man and child in a landscape with a derelict folly, and hard-working men beside a pool). It shows an elegantly dressed couple heading towards a pillared ruined arch, which appe...
Not on display
Caprice View with Ruins
Francesco Guardi
A crumbling, overgrown archway towers above a man and a young child carrying a stick, who are picked out by warm sunlight. The eye is led into the scene by the contrast of light, which illuminates the white stone building beyond, and shade. The use of simple blocks of colour and black lines to su...
Not on display 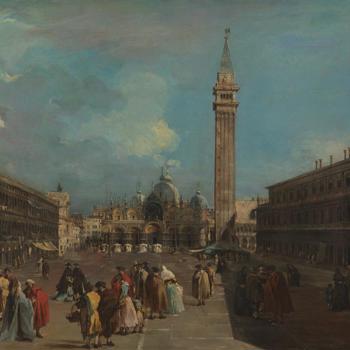 Venice: Piazza San Marco
Francesco Guardi
We look down on a captivating crowd of people and across the Piazza San Marco, one of Venice’s most famous landmarks. Characterful figures draw us into the scene – like the elegant couple in black cloaks who stride across the square, the gentleman dressed in a red cloak and powdered wig or the ma...
Not on display
Venice: Piazza San Marco
Francesco Guardi
Guardi’s shimmering brushwork gives this picture a magical quality. On the far side of the square, the facade of the Basilica di San Marco glows, while a blaze of sunlight warms the sky behind the Procuratie Vecchie, the offices of the Republic’s administration, to the left.Although the figures a...
Not on display
Venice: The Arsenal
Francesco Guardi
The Venetian Arsenal, a fortified shipyard and armoury, had been celebrated as a symbol of the Venetian Republic’s domination of the Mediterranean sea trade since the twelfth century. Its ornate gateway is decorated with statues of Greek and Roman gods; standing guard is the lion, a symbol of the...
Room 38
Venice: The Doge's Palace and the Molo
Francesco Guardi
Guardi delighted in capturing the charm of his beloved Venice, and here he has given it a soft, powdery appearance and dreamy atmosphere. Trade is the focus in the foreground – the basin of San Marco and the quayside is a hive of activity. Lively brushstrokes evoke the bustle of the city at work,...
Room 39
Venice: The Giudecca with the Zitelle
Francesco Guardi
Beyond Venice’s Grand Canal, on the peaceful island of Guidecca in the easternmost part of the city, is the domed church of Santa Maria della Presentazione. Better known as the Zitelle, the church was built in the sixteenth century and attached to a foundling hospital for young girls (zitella is...
Room 39
Venice: The Grand Canal with Palazzo Pesaro
Francesco Guardi
Guardi’s picture takes in the view across the Grand Canal, towards some of the grandest palaces in Venice: the imposing facade of the Palazzo Pesaro is in the centre and the Palazzo Corner della Regina at the far left.A funeral boat glides along the water, carrying churchmen and ornate burning ca...
Not on display
Venice: The Punta della Dogana
Francesco Guardi
The huge dome of the church of S. Maria della Salute dominates the entrance of the Grand Canal. Just in front is the Dogana da Mar (Customs House), built in the 1670s and shaped like a ship’s bow. Above its entrance is a weathervane in the form of Fortune, a personification of the Venetian Republ...
Room 39
Venice: The Punta della Dogana
Francesco Guardi
This scene shows the Dogana da Mar (Customs House), which was built in about 1677, and the entrance to the Grand Canal. Over the gateway to the canal is a golden globe with a weather vane in the shape of Fortune, personified as the mistress of the sea. With almost no land, Venice depended on mari...
Room 39
View of the Venetian Lagoon with the Tower of Malghera
Francesco Guardi
This is one of of Guardi’s most serene paintings. The summery Venetian sky and the water of the lagoon merge almost seamlessly, broken only by a softly painted landscape and a few buildings. The tower of Malghera, the city’s ancient fortress, lay on the edge of the lagoon near Mestre, but the foc...
Room 39
A Ruin Caprice
Imitator of Francesco Guardi
An imaginary ruined castle or fortress, bathed in gentle sunlight, stands on a piece of land that juts into the water. A fishing boat is moored in a sheltered cove, and two figures – perhaps off fishing, as one holds a rod – walk past it along the water’s edge. A gentle breeze coming off the wate...
Not on display
A Ruin Caprice
Imitator of Francesco Guardi
A fortified town sits at the edge of a peaceful lagoon – we see just a few boats and a handful of people. These boats may be carrying supplies to and from Venice; for centuries, the city had profited from strong trading routes with mainland Italy and across the Mediterranean. The foreground figur...
Not on display
Venice: Entrance to the Cannaregio
Imitator of Francesco Guardi
Venetian artists Canaletto and Guardi specialised in view paintings, which were so popular with local and foreign collectors in eighteenth-century Venice that countless imitations were made. These made their way, alongside genuine works by both artists, into art collections throughout Europe. Des...
Not on display
You've viewed 6 of 22 paintings