Dutch, Portrait of a Lady with a Fan

Key facts
Portrait of a Lady with a Fan
Dutch

The young woman in this portrait is shown half length, hands folded in the conventional way for women sitters at this time. We don’t know who she is, or who painted her. Her dress is demure but fashionable and costly. She wears satin and lace, and pearls round both wrists, round her neck and on the little cap at the back of her head. She holds a fan in slender fingers, a sign of gentility.

The two lions in the diamond at the top left corner of the picture have been suggested as part of the coat of arms of the Barons of Basseghem, near Bruges. The painting is dated 1647, when Bruges was in the Southern Netherlands, yet the style suggests a painter from Amsterdam in the north.

Whoever she is, the artist has shown her with the trace of a smile playing about her mouth and in the softness of her eyes as she looks out at us.

Portrait of a Lady with a Fan
Dutch

(Showing 6 of 9 works)
A Company of Amsterdam Militiamen
Dutch
This picture is either a copy of a mid-seventeenth-century Dutch painting, which is now lost, or an imitation or pastiche. As the paint contains a pigment that was not available to artists until the 1840s, it was most likely painted in the second half of the nineteenth century.The picture has pre...
Not on display
Portrait of a Dutch Commander (?)
Dutch
We don‘t know who painted this picture, nor do we know who the sitter is, but his upright stance and direct gaze and the immaculate points of his handsome moustache suggest a man used to authority. The commander’s baton in his right hand confirms his likely rank in the Dutch army.The picture has...
Not on display
Portrait of a Man
Dutch
This portrait was bequeathed to the National Gallery in 1837. Time hasn‘t been kind to it. Painted in oil on an oak panel, the background in particular seems to have suffered damage or been painted over at some point.We don’t know who the sitter is or who painted the picture, but is thought perha...
Not on display
Portrait of a Man and a Woman
Dutch
We don’t know who painted this portrait, or who the couple in the garden are. They seem to pause mid-conversation, their expressions enigmatic, leaving us wondering what the relationship was between them. She holds a glove in her hand – sometimes a symbol of betrothal but always a sign of wealth....
Not on display
Portrait of a Seated Woman and a Girl in a Landscape
Dutch
Age and youth, grandmother and granddaughter perhaps, an unknown artist and unknown sitters. What more can there be to say with such an undefined beginning – is it even safe to say they are grandmother and granddaughter? Maybe not, but their apparent ages and the one firm, fond hand holding the o...
Not on display
Portrait of a Young Man in Black
Dutch
This picture by an unknown artist was once thought to portray Lucius Cary, Viscount Falkland, but a portrait of him in the collection of the Duke of Devonshire shows a different man. He looks out at us with a faint smile, his long, thick hair brushing his forehead and pale cheeks. His costume see...
Not on display
Portrait of a Young Woman
Dutch
This portrait was once attributed to Rembrandt, whose false signature it bears. The predominantly brown colours, the neutral background, the thick brushstrokes on the cuffs and handkerchief and the way that the artist has used layers of paint to depict, for example, flesh tones, are reminiscent o...
Not on display 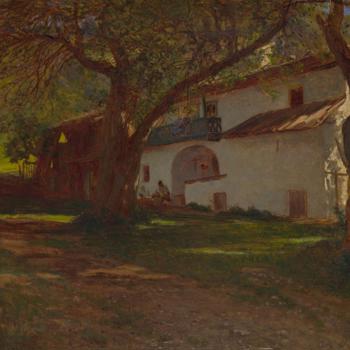 A White House among Trees
Dutch (?)
This small oil painting on millboard has a false signature of the Dutch artist Matthijs Maris. Maris studied in The Hague and Antwerp and also worked in Paris from 1869 to 1877 – his Men Unloading Carts, Montmartre (National Gallery, London) was painted during his time there. He settled in London...
Not on display
Sportsmen Resting
Dutch (?)
We know very little about this lively, unusual painting of three men and three youths apparently celebrating the spoils of a shoot – the men all hold dead game birds. It’s hard to determine their relationship to each other. Perhaps we see a father (far left) and five sons, with their family estat...
Not on display
You've viewed 6 of 9 paintings