The view is of Handeck, a hamlet in the Haslital valley in the Bernese Alps in Switzerland. We are looking south towards the Bernese Alps and its glaciers in the far distance. The Handeck Falls – for which the area is well known – can be seen in the narrow pass just below. The river in the valley is the Aare, which flows from the glaciers.

The Swiss artist Calame was a frequent visitor to the Bernese Alps, and the untamed, rugged beauty of Handeck especially appealed to him. In this small painting, a tall pine tree dominates the scene, rising from a steep mountain overlooking the valley. A storm appears to gather overhead.

Trees had a symbolic meaning for Calame. Although damaged by severe weather, this solitary pine tree might be seen as a symbol of strength, and such human qualities as endurance in the face of adversity.

A solitary tall pine tree rises from a steep mountain slope overlooking a deep valley. Many of its branches have been broken away or are damaged, leaving only the uppermost ones with foliage. A river flows in the valley below, its journey broken by waterfalls as it descends from the mountains. Small huts and fir trees can be seen on the grassy slopes of the valley bottom, which is flanked on either side by rocky cliffs. There is no mid-ground or middle distance; instead, we experience an abrupt shift in scale as our eyes switch from the tree, which is relatively close to us, to the distant valley and mountains. Although very small, the picture creates an effect of immense space.

The view is of Handeck, a hamlet in the Haslital valley in the Bernese Alps. The river below is the Aare, which flows north-west through the valley, forming the Handeck Falls, for which the area is well known. In this painting, we are looking south to south-west towards the Aare glaciers in the far distance with the Handeck Falls visible in the narrow pass just below them. The dark mountain on the left is most likely the Gerstenhörner, which lies to the east of the Grimsel Pass.

The Swiss artist Alexandre Calame was a frequent visitor to the Bernese Alps. His first visit was in the summer of 1835 and he returned often until the 1860s. The untamed, rugged beauty of Handeck especially appealed to him, and he painted numerous views of it, all facing south, including a number of pictures focusing on the waterfall itself. In this painting, however, it is the tree which dominates the scene with the Falls as a backdrop. Calame produced many studies of trees and often made single trees the principal feature in his Swiss scenes from the 1850s, paying meticulous attention to the distinctiveness of each type of foliage. Calame painted this tree’s needles with great precision using dark green, which he then overlayed with a lighter green for the branches closest to us.

Calame was interested in more than just accuracy, as trees also have a symbolic meaning for him – a belief he shared with German artist Caspar David Friedrich and which is of central importance in Friedrich’s Winter Landscape. Although damaged by the forces of nature – such as the darkening storm that appears to be gathering overhead – this pine tree might be seen as a symbol of strength, and such human qualities as endurance in the face of adversity. For Calame, these anthropomorphic qualities also had religious overtones, as he viewed his work as ‘homage ... to the Author of all beauty and truth’. He commented that ‘[The fir tree] before being uprooted rules over vast solitudes alone with God’.

In Calame’s allegorical vision of landscape – whether it be the idealised landscape of The Lake of Thun or dramatic vistas such as this – God’s presence is everywhere. The solitary tree is a token of that presence, but perhaps also stands in for the lone traveller – and us – contemplating God’s work. 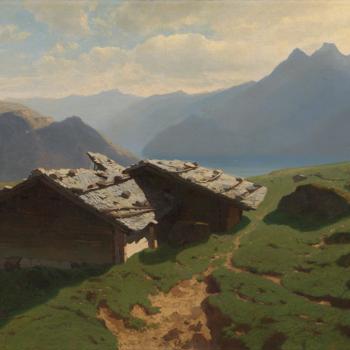 Chalets at Rigi
Alexandre Calame
A mountain massif in central Switzerland, Mount Rigi rises above the waters of Lakes Lucerne, Zug and Lauerz, its main summit reaching some 1,800 metres above sea level. This view is from Mount Rigi itself, looking west over Lake Lucerne to Mount Pilatus. To the left stands the Bürgenstock, with...
Room 45
The Lake of Thun
Alexandre Calame
This is a view of Lake Thun on the River Aare in the Berner Oberland (Bernese Highlands), Switzerland. The sunlit snowy peak in the distance has been identified as the Blümlisalp, but it also has some resemblance to the Jungfrau.Raised near Lake Geneva, Calame knew the Swiss landscape well and so...
Not on display