Detail from Titian, Bacchus and Ariadne, 1520-3

Maybe it was somebody in the crowd – perhaps she had meant to do it… but somehow the bracelet slipped from her wrist and fell into the harbourside water. She gasped as it slithered through the crystal blue. A moment later, there was a shout from the quayside and Theseus dived into the sea. 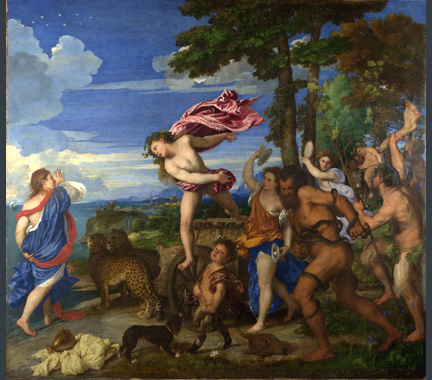 The crowd moved closer to the edge and waited. Far below, they could see Theseus swimming deeper and deeper. Then with a sudden rush, he burst through the water's surface, holding the bracelet aloft and in his other hand a beautiful coronet of coral that twinkled with eight shiny diamonds. Placing the coronet and bracelet in Ariadne's hand, Theseus bowed.

That evening, Theseus stood by the entrance to the labyrinth. Through the steel grill, he could smell the stench of decaying bodies. From somewhere deep under the palace, he could hear the sound of the Minotaur, a low rumbling roar as it paced the cold stone floors. Ariadne pressed a ball of toughened string into Theseus' hands and fastened one end to the metal grill.

Moments later, Theseus was inside the great maze, pacing through the darkness with only an oil lantern to guide the way. Shadows flickered. Gripping his sword tightly, Theseus crouched down and began to pay out the ball of string as he moved forwards. Deeper and deeper he made his way into the lair, expecting at any moment to be attacked.

The sound of the Minotaur pacing in his grim den grew louder. It bellowed out of loneliness. It bellowed for all the years of desperation. Trapped by a cage made of shame and darkness, the half-man, half-bull waited. Now it could smell Theseus approaching. It could hear his footsteps, almost tasting his fear. The bull licked its lips and sharpened the tips of its horns against the rocky walls.

Maddened by its desire for revenge, the bull rushed towards the light of Theseus' lantern but it had lived too long underground. The light blinded its eyes. The Minotaur roared as it stumbled. Theseus stood braced, his sword held out in front of him.

One mistake, a trip towards the light… and the Minotaur staggered towards its death. But the lantern fell and Theseus stood in the utter darkness, the great bull dying at his feet. Which way to turn? Which of the corridors to follow? Which way back through the impenetrable darkness?

At that moment, Theseus felt a slight tug on the string. It must be Ariadne! Holding the string tightly, he began to follow where it led, back through the darkness until at last he saw the light ahead, filtering through the metal grill. He was free!

Gratefully, Theseus seized Ariadne by the hand and they ran through the night streets down to the harbour. Surely a woman as bright and beautiful as Ariadne would make a fine queen? Already his men were hoisting the sail! Ariadne looked back to the great castle and knew that she had to leave her family behind – for the Minotaur had been her half-brother. Terrible as he was, she had betrayed her own flesh and blood.

As the sun broke over the sea, Ariadne stood in the prow of the boat watching the dolphins knit the ocean. For several days they sailed, and in her heart she left behind the world of Crete and began to look forward to her life with Theseus. On the fourth day, they pulled into the shores of Naxos. The men searched for fresh water and provisions.

Meanwhile, Ariadne lay down by a pool and soon found herself asleep so deeply that it might have been enchanted. Hours passed and it seemed as if her dreams were filled with the sound of laughter and sweet music. She woke with a start for she could hear people laughing, singing and shouting. Whoever they were, they were getting closer. Glancing back at the beach, she was amazed to see Theseus' ship setting sail.

Ariadne called and waved but the ship stubbornly made its way towards the horizon, carving a path through the ocean. As the ship grew smaller, it was as if her own heart shrank too, withering like a dried fruit. Abandoned, she stood forlorn. It seemed as if the bracelet that she wore burned on her wrist and the coronet on her head hung heavily.

But as Ariadne stood there, her words of grief caught in her throat, for an amazing sight appeared. Out of the forest stumbled a gaggle of the strangest people she had ever seen. A wooden chariot drawn by cheetahs, driven by a wild-looking man in a red cloak, appeared. Alongside him, maenads ran, singing aloud as they banged drums and clashed symbols. A goat-footed satyr stumbled crazily with a girdle of serpents writhing round his body. A tiny faun whistled to his dog and… behind them, an old man drunkenly leaned back on his donkey, clutching its ears as it brayed like a banshee.

Then the chariot rider reigned in the cheetahs and in one swift movement he leaped into the air, grabbed her coronet and flung it high above the clouds. Within a second, a constellation of eight shiny stars twinkled in the afternoon sunlight, high in the sky. Ariadne gasped. In a moment, she had forgotten Theseus, her betrayal of her half-brother, her mother's anguish – all forgotten. As if she had slept too long under the midday sun, Ariadne's senses were stunned, her memory uncertain.

So it was there, at that moment, trapped in a heartbeat, that the god Bacchus created the constellation of Ariadne and cast his spell over her crying, "You are my star and will shine for ever!"

Now some sailors claimed that Theseus had grown tired of Ariadne and abandoned her on purpose. Others claimed that one moment he was scanning the shorelines for his love and the next he seemed to have forgotten her. It was as if she had never existed. And they claimed too that, at that moment, they heard the sound of laughter and singing echoing over the sea. And they claimed too that, at that moment, a set of eight stars began to shimmer in the afternoon sky where seconds before there had been sheer blue.

Deciding that it was the work of the gods, the sailors returned to their tasks and no one saw Ariadne again. Though years later, Theseus still had an old ball of string on his window sill which sometimes he would handle idly, with a faraway twinkle in the dark cage of his eyes.