Pupils at Crown Lane Primary School in London worked with the painting 'Perseus turning Phineas and his Followers to Stone' by Luca Giordano, to hone their storytelling skills.

Watch the animation the pupils produced, working with the Lambeth City Learning Centre, and see the storyboards they used to create the animation.

Storytelling: Perseus
Working with the Lambeth City Learning Centre, pupils produced this animation of 'The Adventures of Perseus', with improvised voice-over.
A tale of forced weddings, heroes and vengeance
Animation by Crown Lane pupils at Lambeth City Learning Centre – 6 mins
Storytelling: Medusa
A cape of invisibility and a pair of shoes that can fly
A pupil from Crown Lane Primary School retells the story of Perseus – 6 mins

Mapping out the story

Pupils made story maps to help them remember the story of Perseus. After practising, they could then tell the whole story without the maps. 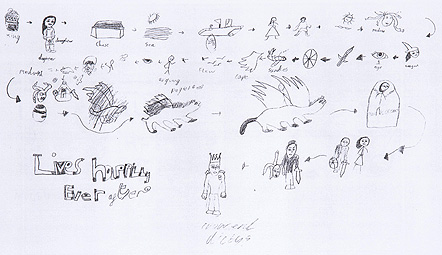 "The project really fired the imaginations of both my class and myself. Using the painting of 'Perseus turning Phineas and his Followers to Stone', we explored the disrupted wedding feast of Perseus and Andromeda, a really engaging way of introducing the myth. After searching for clues, the children were keen to discover the actual story."

"With their story maps as prompts, we used oral storytelling and drama to make the story our own. We developed oral techniques such as using dramatic pauses, maintaining eye contact and varying volume and pace. This gave even the most reluctant writers confidence to write extended, quality stories.

"Oral storytelling engages the listener far more than just reading it. So much so that when I paused halfway through a story, one child leapt up and shouted: 'What is wrong with you, Miss! You can’t stop there!'"

"Children learned about tension, drama and, most of all, keeping the reader hooked. They particularly loved the idea that they could make stories their own. When I corrected a detail in one child's story, he looked at me and said, 'That happens in your story, not mine.'"

"The trip to the National Gallery inspired them in so many ways. As we walked in, I didn't think my class had followed at first, because of the silence behind me. Turning around, I could see the awe and wonder on their faces as they saw all the paintings."

"As for me, I have realised the massive potential for different creative starting points in literacy. I have also developed, alongside my class, an awareness of all the stories hidden in paintings, just waiting for someone to pick them out and make them their own."