The adventures of Perseus

The adventures of Perseus [PDF 153kb – opens in a new window]

Long ago in Greece there lived a king called Acrisius who had just one daughter, a beautiful girl named Danaë. But Acrisius had a streak of jealousy that ran through his soul and tainted everything that he touched. He could not stand to see anyone go near his daughter and, most of all, he could not bear the idea that someone might take her from him. She would marry no one! 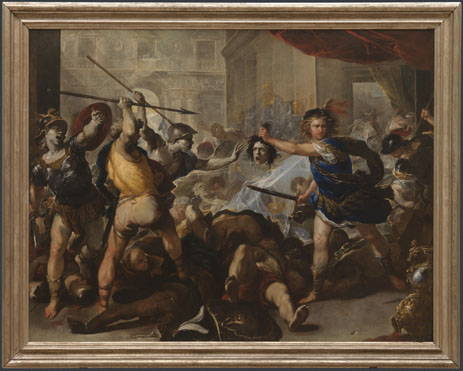 Luca Giordano: 'Perseus turning Phineas and his Followers to Stone'

So, in the dead of night, he summoned his blacksmith. The poor man trembled as he was dragged before the king. There in the darkness of the great hall with the rush lights flickering, casting dark shadows on the walls, Acrisius ordered him to build a huge chamber of bronze.

Day by day the blacksmith laboured in secret, building a chamber the size of a large bedroom. In the roof was a tiny window that let in a little daylight. When the room was finished, Acrisius locked Danaë and her old nanny inside. He ordered the blacksmith to seal the chamber leaving only a small hole in the door through which food and water could be passed.

So it was that the years ran by until finally the great god Zeus saw Danaë through the tiny window in the roof. That night Danaë woke to hear the sound of rain. As she opened her eyes, she was amazed to see droplets of golden light shimmering through the window. She stood under the shower of gold and felt a shudder of Zeus power pass through her.

Now, it was nine months later that Danaë gave birth to Perseus. For several years she managed to keep the secret from her father with the help of her nanny. But one day Acrisius was walking in the courtyard. He stopped at the chamber and felt its smooth, burnished sides and tried to remember what his daughter looked like. It was at that moment that he heard a child laughing from inside. Enraged, he ordered his guards to unseal the chamber. Danaë, the nanny and young Perseus stumbled out into the daylight, blinking like owls.

Acrisius ordered the poor nanny to be executed. Before her blood had run dry, a large chest had been made. Danaë and Perseus were squeezed into the chest, the lid nailed down and it was thrown into the sea. Acrisius stood on the beach and watched as it bobbed further and further into the distance. Knowing that he had sent his own flesh and blood to their doom, he stood staring until the sun set. But the chest was tugged by powers stronger than a king's hatred and it drifted towards the island of Seriphus.

Dictys the fisherman would never be rich, but he was a kind man. Every day he went down to the rocks where he cast out his nets and dragged them back in, hoping for a silvery catch. Now, on this morning, when he began to pull in the net he had to call to the other fishermen, for there was something trapped.

It was not a dolphin as they suspected at first but a huge chest. They dragged it onto the beach and before Dictys had a chance to force it open, the lid moved of its own accord. To his amazement, out stepped a beautiful young woman and her toddler – Danaë and Perseus.

And because he was a good man, Dictys took them into his humble home. Danaë did not once think of the palace that she had known, for Dictys gave her freedom, the sunlight and the beautiful sea. Now the years ran by happily until the king of the island, Polydectes, fell in love with Danaë, almost as if he could not help himself. He wanted to marry her.

But Perseus, who now stood tall, declared: "No man may marry my mother without my word, for I am her only male relative." The two argued and Polydectes taunted Perseus. Enraged, Perseus swore by Zeus that he would provide a wedding gift for Polydectes, a terrible gift – the head of the Medusa. Terrible because with just one glance, she could turn any living creature to stone!

No sooner had the words been spoken than Perseus regretted what he had said. But it was too late. He had sworn by Zeus and now that could not be changed. That evening, Perseus stood by the sea, staring out at the waves and wondering how he could ever find and capture the Medusa's head. He knew that Medusa lived with her sisters, the Gorgons. And only the three one-eyed witches knew where she lived.

As he was wondering how he would find the one-eyed witches, he heard a noise behind him. There was the goddess Athena, who gave him a sword that would slice through any metal, and a shield polished until it shone like a mirror. But more than that, for Hermes the god of trickery had stolen a cape of invisibility, a pair of winged sandals so that Perseus could fly, and a sack to conceal the Medusa's gory gaze. Then Hermes whispered to Perseus an idea, a little seed of an idea that soon took root.

On winged sandals Perseus flew to the one-eyed witches' lair. Ancient as time, wrinkled and stooped like three ragged crows, they sat, muttering and cackling. Perseus stood between them. They sensed his presence but could not see him because their eye sockets were empty.

"Now tell me, fair lady, where is Medusa's den?" Within seconds the hags began to quarrel about which one was the fair lady. To solve the question, one of them produced an eye – the eye they shared. She was about to put it into her empty eye socket when Perseus grabbed it. He said: "Tell me where Medusa lives – or I'll throw this bright bauble to the seagulls." It stared up at him, almost knowingly. He shuddered and closed his fist around its jelly.

Sooner rather than later, Perseus had his answer and was flying across dark rocks until he came to the mouth of the cave where the Gorgons slept. Their leathery wings were folded but their hair writhed in a knot of serpents. He drew his sword but was uncertain which was Medusa. Then he noticed that by one Gorgon, tiny mice had been frozen into stone. It had to be Medusa!

He took his sword and crept closer. Using the shield as a mirror, he avoided her icy stare. With a scream and one blow, he sliced off her head and scooped it into the sack. Wearing his cape of invisibility, he crouched in the shadows as the sisters searched the cave.

Once they had left, Perseus noticed that out of Medusa's foul body a tiny winged horse struggled. It flew round the cave, casting white light. And it grew. There was no time to lose. Perseus mounted Pegasus and they set off, back to Polydectes' castle. For at that very moment, the wedding guests were arriving. Danaë was about to be forced into marriage!

As they flew over the sea, Perseus saw below a beautiful girl chained to a rock. It was Andromeda about to be sacrificed to a sea monster. Pegasus dived down and his shadow on the sea confused the monster. It took only one blow and the sea monster died. Taking Andromeda with him, Perseus wished to fly on for he knew that little time was left. But Andromeda's father Phineas had other plans and summoned Perseus to his banqueting hall.

Perseus hid the Medusa's head in his leather bag and strode into the great hall. As soon as Perseus was inside the room, Phineas called to his men. Surrounded by spears, swords and shields, Perseus stood quite still. The archers drew back their bowstrings, men raised their spears ready to strike down Perseus.

But as Phineas roared his command, Perseus tugged the Medusa's head from the bag. He turned to look away from its dreadful stare but all those around him were transfixed. At first their limbs seemed to harden, their bones ached and then gradually as their skin turned grey, their minds froze, trapping them in eternity. Like great marble statues, the warriors tumbled.

Now, you may wonder why Andromeda was not angry with Perseus, but the answer is simple enough. It had been her own parents who had tried to sacrifice her to the monster so there was little love between them. But even she shuddered at the sight of so many cold bodies, already hard as rock. Perseus did not waste time in summoning Pegasus and soon he was riding with Andromeda across the sea.

The time seemed to crawl by as the ocean and landscape swept under Pegasus' shadow but, in the end, they landed inside the castle walls. There poor Dictys wept, for Danaë was about to be forced to marry Polydectes. But Perseus strode into the banquet. "So, where is your gift?"  sneered Polydectes.

"Here!" roared Perseus. Everyone turned to stare and, like a great magician, Perseus tugged Medusa's head out of the sack.

Only Danaë did not look, for she was ashamed of what had been about to happen. But everyone else was curious and in one moment their curiosity froze them, their limbs crystallising to stone.

And Perseus strode up to Polydectes, took his crown from the statue's head and marched outside. There in front of the townsfolk, under the midday sun, he placed the crown upon Dictys' head and pronounced him their fisher king.