Image: Detail from Pierre-Auguste Renoir: The Umbrellas, about 1881-6 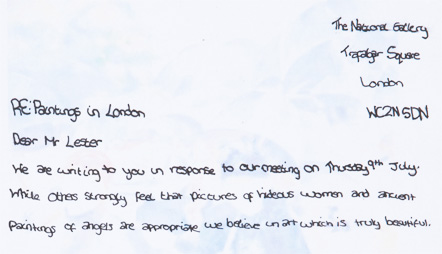 We are writing to you in response to our meeting on Thursday 9 July.

While others strongly feel that pictures of a hideous woman and ancient paintings of angels are appropriate, we believe in art that is truly beautiful.

'The Umbrellas' is (by far) the most exquisite painting. It fires up imagination and asks several questions that are clearly impossible to answer. And it leaves the audience thinking about things for longer, which I believe art should truly achieve.

The people in London will feel elated and excited because they will be so surprised that people can be smiling despite the grim weather, just because of umbrellas. They should understand that rain doesn't have to mean sadness – perhaps they should consider rain also shines. Please consider our proposal. We look forward to your response.

Back to Framed: Pupils' work: Umbrellas

A Headteacher, John Camp, from Deansfield Primary School, describes how working with a painting raised the attainment levels of all his pupils.

A discussion of how paintings can help teach narrative, with comments from a Headteacher and a pupil

Narrator: Pupils also respond to the National Gallery paintings that appear in the story, as this head teacher describes

Headteacher: You know the use of painting always enables children, especially reluctant writers, to engage much more confidently with narrative.

And I think it is the strength of the narrative in the paintings that are in the book, it means that teachers are able to plan the most amazing learning experiences for their children.

Narrator: The pupils' creative output is often collated, displayed and celebrated. Some schools collect work in journals or make books.

Listen to the extracts from 'Framed' that inspired the children.

Writer Frank Cottrell Boyce reads an extract from his novel 'Framed', in which Renoir's 'The Umbrellas' is unpacked

The picture was still in its box. All the paintings were in boxes, but before taking one off to London, Lester liked to open it up and make sure it was the right picture and that it wasn't damaged.

Then he'd put it back in the box again. 'The whole thing should only really take about half an hour,' he said,'But I like to do it on a Thursday so I have the whole weekend alone with the picture. I have it boxed up again on Sunday evening and then travel up to London with it on the Monday morning. I always accompany the art. Just to be on the safe side.'

While he was talking, one of the men was undoing the box. It was surprisingly complicated. The box had a lid that fitted tight to the top. You lifted that off with a crowbar.

'The trick is finding the groove where the crowbar fits,' said the man. 'It's 'ere, under the writing, look. Just under the 'T' of National.'

Inside, the box was stuffed with straw and there were these metal brackets to hold the picture in place. The top two had little catches on them so you could undo them and lift the picture out. I couldn’t believe it. It was a picture of rain.

'I thought I'd play safe for a week. This is a very popular picture.'

The painting by the way is called 'Umbrellas' and it's by Renoir. It's a picture of people standing out in the rain with their umbrellas up. Except there's a woman at the front with a big shopping basket. She looks a bit miserable, which could be because she's got no umbrella, or it could be because her shopping basket is probably filling up with water.

There's a beardy bloke behind her saying something, probably, 'Do you want to buy an umbrella?' It looked like any day in Manod, really. Except most people in Manod don't have umbrellas.

Lester said, 'It's not entirely without interest. In it you can see Renoir moving away from straightforward Impressionism, towards something more classical and sculptural. The woman at the front, for instance. And yet the play of light and shade across the umbrellas themselves is true to the original aims of –'

'The play of light and shade across the umbrellas? Yes, I think we can say he –'

'The people,' said Mam. 'They’re out in the rain, but they're all smiling or getting on with things. Why are they so happy?'

The man who'd been helping with the box said, 'Maybe they're somewhere where it hardly ever rains. Maybe that's why he painted it? Because rain was a special occasion.'

'Interesting,' said Lester, 'But inaccurate. He painted this picture over a long period. He began it in 1881 and didn't finish until 1884. I'm not saying it poured down continuously for three years, but I do think a certain familiarity with rain over that period can be presumed.’

'Exactly,' said Mam. 'It's umbrellas. You hardly see umbrellas any more. Don't they look lovely. Like big flowers. And every one of them's got two people under it. Whispering, chatting, laughing. The umbrellas are like parties on sticks.'

And that was it. On Saturday morning, Mam took us all to the Pen-y-bont Car Boot Carnival (this year's beneficiary: the mid-Snowdonia meals-on-wheels) and told us all to go and look for umbrellas.

I got two of those little telescopic black ones that fit in your glove compartment, and a gold umbrella the size of a satellite tracking station with 'Gordon's Gin – the gin that thinks it's it' written all round it.

Minnie found a whole bag full of kids' umbrellas with ducks and frogs on. Marie found a white one with a pearly handle, which was more pretty than waterproof.

Mam found a whole load, too. And when she'd finished at the car boot, she took us to the Oxfam shop in Llanrwst, the Sue Ryder shop in Blaenau, and the Mountain Rescue shop in Manod, still looking for umbrellas.

And when we got home, she went up into the loft and found three more there. Fifty umbrellas altogether.

She got Marie to paint some flowers and the words 'Manod parapluies – take one, they're free' on three of the old plastic flower bins from the shop.

She put a bin full of umbrellas on the forecourt next to the papers. She put the second one in the bus shelter, and the third one she filled with the frog and duck umbrellas and asked Ms Stannard to put it in the playground.

'Umbrellas?' said Ms Stannard. 'There's a health and safety issue there. They could poke each other's eyes out.'

'I never thought of that,' said Mam. 'Then again, if you can't poke someone's eye out in primary school, when can you? Let's give it a go, Mrs Hughes.'

That lunchtime, no one opted for wet play. Even though it was raining as hard as usual, everyone took an umbrella and played out. Actually there weren't enough umbrellas, but that was OK. People just shared, like in the picture. In the playground, it felt like you were inside a great big restless tent. Back in the classroom, the Connect Four and the big draughts stayed in their boxes.

Most people in our school get a lift to school, but the morning after the umbrellas came, everyone took an umbrella and walked.

From up where we are, at the top, in the garage, it looked like a massive colourful snake moving down the street. It looked so good, people would come up to the garage just to look down the street. And they bought coffee! In the end Newspaper Arthur came and wrote about it:

There are many unusual sights in Snowdonia but few as colourful as the so-called Manod March. Every morning at 8.50 and every afternoon at 15.45 the streets are briefly ablaze with colour. And what's the reason? Umbrellas! Manodians have taken to doing the school run on foot, with umbrellas.

The massed umbrellas of Manod can be seen snaking up and down the whole length of the Blaenau Road like a psychedelic boa constrictor. When I say briefly, by the way, I mean it. Get there ten minutes too late and Manod is just another rainy, grey mountain town.

That's if you get there at all. There's no sign for Manod on the A496 and the turn off itself is difficult to spot, concealed as it is by the advertising billboard for Diggermania (Harlech).