Detail from Francisco Antonio Gijón, 'Saint John of the Cross', about 1675. Image courtesy of the Board of Trustees, National Gallery of Art, Washington, DC. Patrons' Permanent Fund (2003.124.1)

The Making of a Spanish Polychrome Sculpture

Detail from Francisco Antonio Gijón, 'Saint John of the Cross', about 1675. Image courtesy of the Board of Trustees, National Gallery of Art, Washington, DC. Patrons' Permanent Fund (2003.124.1)

To coincide with the major National Gallery exhibition, The Sacred Made Real, this special display examines the technical challenges of making a polychrome sculpture.

The focus of the display is Francisco Antonio Gijón’s lifelike depiction of 'Saint John of the Cross’ (1675). The exhibition responds to recent research, revealing the full complexity of the processes involved, from the carving and application of gesso to the painting of the flesh tones and decoration of the drapery, during which the sculpture is brought to life. 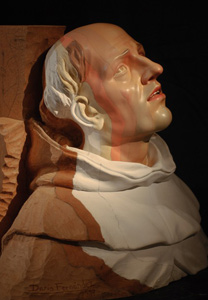 Image: Detail from Darío Fernández, ‘Contemporary copy of the head and cowl of Saint John of the Cross by Francisco Antonio Gijón’, 2009. Generously supported by The Matthiesen Foundation, London, and Coll & Cortes, Madrid. Photo © Darío Fernández

Francisco Antonio Gijón’s Saint John is shown alongside 'Saint Francis standing in Ecstasy' (after Pedro de Mena’s version of the subject on display in The Sacred Made Real) and José de Mora’s 'Virgin of the Sorrows'.

In both these later works, realistic touches such as glass eyes and ivory teeth were added to heighten the sense of naturalism, a development that would capture the imagination of later artists, such as Degas and Picasso.

Visitors will have the chance to gain an understanding of an art form that thrived in 17th-century Spain and remains alive today. The exhibition features a modern-day bust-length copy of Gijón’s 'Saint John of the Cross' by the Seville-based sculptor-painter Darío Fernández. His model reveals the different stages in the production of these remarkable works.