Michelangelo was born in Caprese, He trained in Florence, where drawing and inventive compositional design were paramount, in the studio of painter Domenico Ghirlandaio. Here he learned to conceive his composition and draw it out on paper before transferring it to the wall or panel. Michelangelo learnt to paint in fresco and egg tempera, as seen in his Manchester Madonna.

Also evident in this design is his sculptural approach to the body. He learned to sculpt at the court of Lorenzo de’ Medici (1449–1492), Florence’s de facto ruler. It was with sculpture that Michelangelo would make his name in Rome, in the last years of the 15th century.

Michelangelo, ‘The Virgin and Child with Saint John and Angels ('The Manchester Madonna')’, about 1497 © The National Gallery, London

Sebastiano was from Venice, where luminous colour played a dominant expressive and compositional role. His mentor was Giorgione who emphasised atmospheric and lyrical qualities and a partly improvisatory approach to composition that often involved major changes while working, as seen in Sebastiano’s ‘Judgement of Solomon’ (about 1506–9). 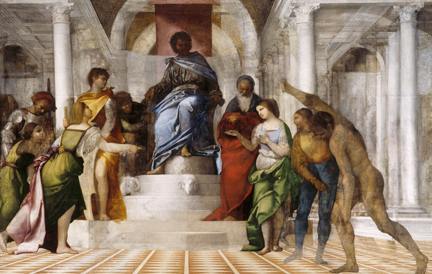 By the time Sebastiano moved to Rome as part of the entourage of the Sienese banker Agostino Chigi (1466–1520), he was thought to be the most accomplished oil painter of his generation in Venice, even above Titian.