The Victorian passion for mauveine, following its invention during the 19th century is examined in the ‘Purple' room. A favourite of Queen Victoria, the colour became highly fashionable during her reign. Purple, until this point, had been achieved by mixing red and blue pigments together. Its only mineral source was fluorite – which artists rarely used – a specimen of which will be on display, on loan from the Natural History Museum.

A remarkable example of purple from mixed blue and red pigment can be seen in ‘The Beheading of Saint Margaret (?)’ by Gherardo di Jacopo Starnina (Master of the Bambino Vispo). 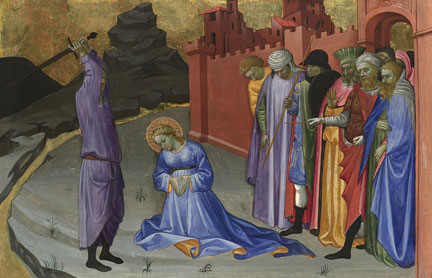