Why was The Horse Fair chosen for conservation treatment, Hayley?

Although the painting was in an excellent overall condition, the overlying layers of wax and varnish had darkened and discoloured. Also, several passages looked cloudy or foggy due to high proportions of wax.

What is the first step you take before beginning any conservation treatment?

The painting undergoes a thorough examination in the studio, typically informed by infrared reflectography and x-radiography. Curatorial colleagues help to set the painting in its art historical context, and members of the Scientific Department undertake preliminary technical analysis. The aim is to gather as much information as possible about the painting and artist prior to the commencement of treatment. 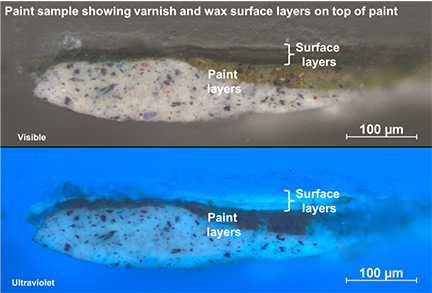 What did the scientific analysis find in this case?

Scientific analysis revealed that there were two non-original coatings present on the surface.

The first, closest to the paint surface, was a paraffin wax polish. This was followed by a layer of a synthetic ketone resin, probably applied in the 1950s (indeed, the specific resin identified was not invented until the 1950s).

How did these findings inform your method for removing the varnish?

After carrying out cleaning tests, I chose a combination of two particular solvents which enabled me to remove both layers present on the surface in a steady, controlled fashion.

I then used small cotton swabs, dipped in the solvent mixture, to slowly and carefully solubilise and remove the discoloured layers.

The film above demonstrates this process in one area of the painting – the sky – where it was possible to safely remove the vast majority of the varnish and wax. Certain passages, however – mainly the browns and blacks but also the darkest blue shadows and deepest greens – were found to be slightly solvent-sensitive, so it was not always possible to clean them to the same level as the rest of the painting.

A detail of the sky during restoration

What other tools do you use to carry out the work?

I always use magnifying glasses (‘optivisors’) so that I can see minute details. I also found the use of ultraviolet light invaluable. The old varnish layer fluoresced strongly under the ultraviolet light, whereas the paint layers did not, so this helped me to remove the varnish as evenly as possible.

How has the varnish removal changed the way we see the painting?

A varnish that has darkened and yellowed significantly affects the colours applied by the artist. This was especially noticeable in the blues, which now appear lighter and cooler, and certainly closer to how they would have appeared when the painting was first made.

A degraded, old varnish also compresses the tonal range within a painting, so you lose the sense of depth or recession. You can really see how this has improved by comparing the foreground of ‘The Horse Fair’ before and after cleaning.

A detail of the foreground during the restoration, demonstrating how it looked before and after cleaning

Were there any surprises?

Yes, something less expected but very pleasing, was the rediscovery of the painting’s texture. Bonheur’s brushwork is incredibly varied; she was an artist who loved to create differentiated surfaces. The brushwork in the sky is bold and vigorous whereas the brushwork used for the horses’ coats is much finer (so much so that it was sometimes necessary to use small brushes instead of cotton swabs to remove the varnish).

By contrast, at the bottom of the painting, for the dry and dusty foreground, the paint strokes are broad and rough. This was an artist for whom texture really mattered, something we weren’t really able to appreciate before when it was covered by wax and varnish, but which has become increasingly apparent.

Bonheur's fine brushwork on one of the horse's coats

Did you revarnish the painting after cleaning?

Yes, the painting received a thin spray varnish after cleaning. The varnish was purposefully applied as thinly as possible to allow full appreciation of the painting’s textural qualities. Minimal restoration work was required to fill and retouch one small loss.

Where can we see the newly cleaned painting?

You can see the painting in Room 45 alongside other French 19th-century paintings. I hope you enjoy!