This is a painting of sheer animal power. Brilliant white light builds up the turbulence and excitement of the scene. Rosa Bonheur has made the convulsion of the muscles and the flying manes almost tangible, capturing the rearing, plunging animals and the strength and dexterity of their handlers with almost photographic reality. The magnificent white horses in the picture are Percherons, bred for hauling weights. Bonheur has captured their spirit and their world, with its noises, smells and sense of danger, and made them into high art.

The original version of The Horse Fair was four times the size of the National Gallery picture, painted when the work of women artists was largely disregarded by critics. It caused a sensation at the 1853 Paris Salon, toured Britain and the US and brought Bonheur international fame. This smaller autograph version was painted to facilitate the making of prints for sale during the tour.

This monumental painting depicts sheer animal power. Brilliant light builds up the turbulence and excitement of the scene, and creates a sheen across the horses’ enormous rumps. Rosa Bonheur has made the convulsion of their muscles and their flying manes almost tangible, capturing the rearing, plunging animals and the strength and dexterity of their handlers with almost photographic reality. But she has also captured their spirit and their world, with its noises, smells and sense of danger, and made them into high art.

The diagonal avenue of trees diminishing in size from right to left establishes the extent of the market and leads to the dome of the Asylum of la Salpêtrière in the distance. Horse fairs were held in the Boulevard de l’Hôpital in Paris twice weekly, and for over a year Bonheur attended them, making sketches and absorbing the atmosphere. The magnificent dappled white animals here are Percherons, the strongest kind of horse bred for hauling weights. Bonheur recorded how handlers would manoeuvre their horses into forceful movement so as to demonstrate their strength and mobility to prospective buyers. But we don’t see any buyers in this picture, so the scene appears more wild and uncontrolled than it may have been in reality – although it was enough for Bonheur to apply for a ‘permission de travestissement’ from the local police. This gave her permission to wear men’s clothes, which she afterwards wrote was ‘a protection to me – avoiding disagreeable comments from the company… they took me for a little lad.’

While at the horse fair, Bonheur was reminded of the casts she had seen of the marble frieze created to decorate the Parthenon, an ancient Greek temple dedicated to Athena. It shows strong warriors controlling rearing horses, but Bonheur wanted not to imitate them but to interpret them. She also studied the work of Théodore Géricault, a painter of a generation earlier who often depicted horses in traumatic situations and who was the first French artist to visit horse fairs and slaughterhouses. His Horse Frightened by Lightning is also in the National Gallery’s collection.

The original painting of The Horse Fair was almost four times as large as this version, causing a sensation at the 1853 Paris Salon. It remained Bonheur’s largest and most ambitious work and is now in the Metropolitan Museum of Art, New York. This original image brought fame to the artist, at a time when the work of women artists was largely disregarded by critics and collectors alike. She was a well-known and successful ‘animalier’, or animal painter, before the original version of The Horse Fair was painted, but when that work toured Britain and the US she became an international celebrity.

Bonheur was asked to produce a smaller version to facilitate the making of prints for sale, and some years later the picture was bequeathed to the National Gallery. Unhappy with its condition she offered to make yet another version, but the National Gallery was unable to accept it for legal reasons. Bonheur restored the picture instead, signing it as her own – it is this painting you see in the Gallery today. 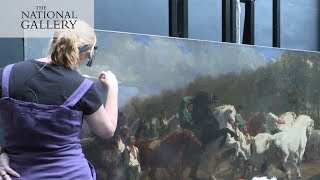 Conservator Hayley Tomlinson takes us behind the scenes in Conservation to discuss the cleaning of Rosa Bonheur’s ‘The Horse Fair’.