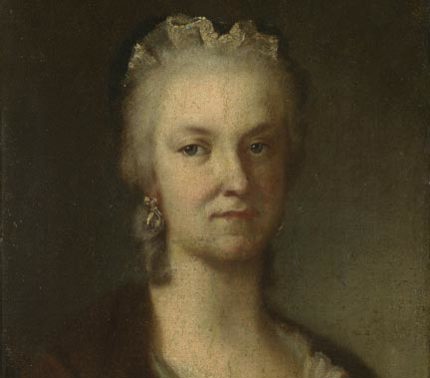 Carriera was born in Venice into a modest family and was most likely self-taught. She became internationally celebrated as a pastel portraitist, often portraying foreign visitors to Venice. In 1705 she was elected a member of the artist's academy in Rome, the Accademia di San Luca.

In 1720-1 she was in Paris where she painted Louis XV (1710–1774) as a boy and became a member of the French Académie Royale de Peinture et de Sculpture. Among her many admirers was Frederick-Augustus II, elector of Saxony, who filled a room in his Dresden palace with more than one hundred of her pastels. In 1745 Carriera's eyesight began to deteriorate and by 1749 she had become permanently blind, thus no longer being able to work. Her mastery of the pastel medium helped transform it into a serious and highly-admired art form.

Portrait of a Man
Rosalba Carriera
An unknown man looks out from this portrait with a self-assured stare. His rosy lips, soft eyes and pale, youthful complexion are framed by a curly white wig that falls down his back. It is held in place with a neat black ribbon, as was fashionable for wealthy gentleman of the time.Carriera was n...
Not on display
Rosalba Carriera
After Rosalba Carriera
Rosalba Carriera was one of a small number of women to make a highly successful international career as an artist in the eighteenth century. A native of Venice, she began by painting portrait miniatures on ivory, but by the time she was in her twenties she was attracting an international clientel...
Not on display