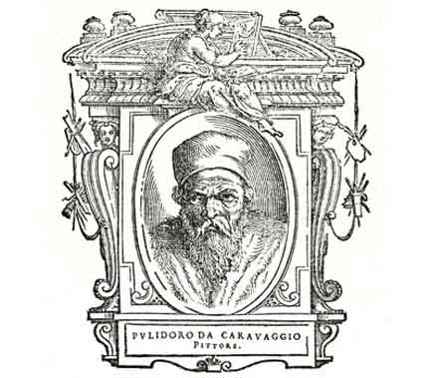 Like his more famous compatriot, Caravaggio, Polidoro takes his name from the Lombardy town where both artists were born. Long after his death Polidoro was famed for his monochrome paintings on Roman palace façades. Mostly ravaged by time and the elements, these paintings, which are known today from numerous drawings and sketches still in existence.

With no formal art training, Polidoro arrived as a youth in Rome and worked as a plasterer in Raphael's workshop. His frescoes for the Roman church of San Silvestro included scenes in which the narrative characters were subsidiary to the majestic landscape settings. These paintings influenced the landscape productions of laterartists including Annibale Caracci and Domenichino.

Polidoro left Rome following the Sack of the city in 1527 and, after a brief stay in Naples, moved to Messina in Sicily, where he was to stay until his death. The paintings in the Collection, The Way to Calvary and Knight of Saint John, date from this period.

The Way to Calvary
Polidoro da Caravaggio
This is one of three preparatory oil sketches for one of Polidoro’s most important works: the altarpiece for the oratory of SS. Annunziata in Messina, Sicily (now in the Museo Nazionale di Capodimonte, Naples). It shows Christ collapsing under the weight of the Cross as he carries it to Calvary w...
Not on display