Dujardin was a leading painter of Italianate landscapes. Figures and animals feature prominently in Dujardin's landscapes. The animal paintings of Paulus Potter influenced him, as well as the landscapes of his master, Nicolaes Berchem. He also painted portraits and some religious scenes, such as 'The Conversion of Saint Paul'.

Dujardin was probably born in Amsterdam, the son of a little-known painter, Guilliam du Gardin. According to his biographer Houbraken, he trained with Berchem; he later visited Rome. In the early 1650s he is recorded in Amsterdam and in 1656 in The Hague. By 1659 he had apparently returned to Amsterdam. He visited Italy again in 1675, and he died in Venice three years later.

A Woman and a Boy with Animals at a Ford
Karel Dujardin
In the shade of a rocky cliff, a woman and a child wade in the shallow water of a ford. She looks down at the little boy as he takes a pee in the river. Images of small nude boys relieving themselves were unremarkable in the seventeenth century, although the boys were usually two or three years o...
Not on display 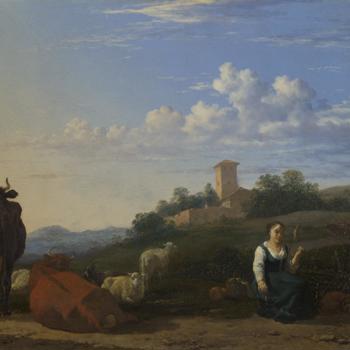 A Woman with Cattle and Sheep in an Italian Landscape
Karel Dujardin
A young woman sits on a grassy bank spinning wool, distaff tucked under one arm. With a half-smile on her face, she looks with great concentration at her fingers untangling a lump in the wool. The twirling spindle hangs from her other hand. Karel Dujardin sets the animals that the young woman ten...
Not on display
Farm Animals with a Boy and Herdswoman
Karel Dujardin
The sun catches the face of a sheep lying in the shade of a tree. Light filters down through the leaves on to its thick curly fleece, painted in exquisite detail by Karel Dujardin.Dujardin has added a quirkiness to his figures, giving them real humanity. The herdswoman has found the tedious busin...
Not on display
Sheep and Goats
Karel Dujardin
Dujardin’s animals are alive and realistic. They’re softly lit, the white wool of the sheep almost glowing in the evening sun; their solid, rounded forms are echoed in the puffy white clouds overhead. The flesh under the wool appears plump and heavy, and the skilled painting of the wool itself ma...
Not on display
The Conversion of Saint Paul
Karel Dujardin
This large painting tells the dramatic New Testament story of Saint Paul at the moment of his conversion to Christianity. He had persecuted Christians in Jerusalem but was struck down on the road to Damascus by a vision of Christ, who asked him why. Paul was blinded, and Christ sent a man to rest...
Not on display