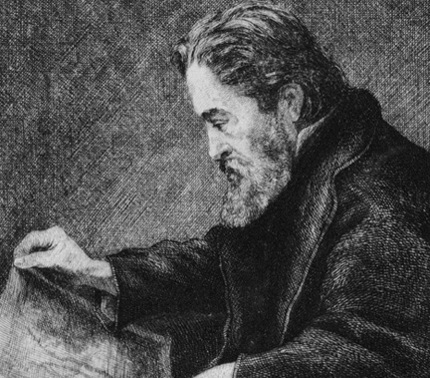 Chintreuil was born in Pont-de-Vaux (near Mâcon). From 1842 he studied in the studio of Paul Delaroche, but it was Corot who encouraged him to paint in the open air. He initially painted in the immediate surroundings of Paris, but in about 1850 he settled in Igny, in the valley of the River Bièvre, south-east of the capital. In 1857 he moved again, this time to La Tournelle-Septeuil near Mantes-la-Joile in the Seine valley. In 1861 he travelled to Fécamp on the Normandy coast, where he made a series of studies of the sea. A painter of delicate and atmospheric landscapes, Chintreuil was particularly drawn to the changing tones of the sky - this interest in light effects made him a precursor of the Impressionists.

House on the cliffs near Fécamp
Antoine Chintreuil
Fécamp is a fishing town on a part of the Normandy coast known for its high limestone cliffs. Chintreuil visited the area in 1861 and painted a number of open air oil studies on paper, including this one, which was later stuck down on canvas. Pinpricks in each corner of the paper suggest it was p...
Not on display