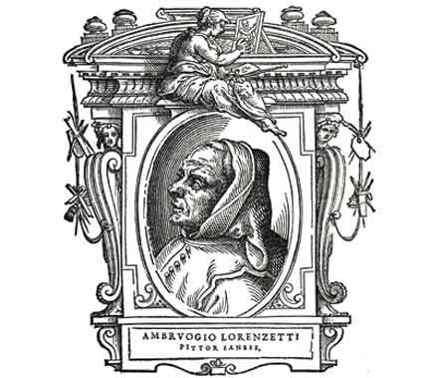 Ambrogio was probably the younger brother ofPietro Lorenzetti who, with Simone Martini, was the leading painter in Siena after the death of Duccio (1319). The Lorenzetti brothers introduced to Siena the style of Giotto; Ambrogio is documented as having visited Florence.

The frescoes in the Palazzo Pubblico, Siena, constitute his most important work, together with a 'Purification of the Virgin' of 1342 (Uffizi, Florence). Ambrogio Lorenzetti's first signed and dated painting is of 1319. He is documented in Florence in 1321 and in 1327 was inscribed with the Physicians' Guild to which painters belonged. In 1335 he is recorded as working with his brother, Pietro in S. Maria della Scala in Siena. His 'Purification of the Virgin' (Uffizi, Florence) is dated 1342 and is one of the four altarpieces with narrative scenes from the life of the Virgin painted for Siena Cathedral.

Ambrogio made his will in 1348 and is presumed to have died in the Black Death.

A Group of Four Poor Clares
Ambrogio Lorenzetti
This is a fragment of a fresco that was discovered under whitewash in 1855. It shows a group of nuns; the central figure has a gentle gaze and gracefully places her hand across her breast. It is in good condition but some of the colours have faded. Traces of brown paint remain in the tunics, ide...
Room 52