Lucy West and Sylvie Broussine were selected to join the 2015-17 National Gallery Curatorial Traineeship programme with Art Fund support and with the assistance of the Vivmar Foundation. 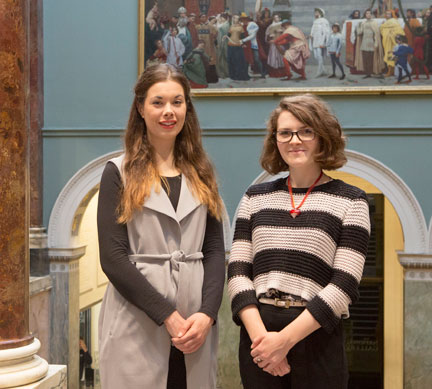 After a six-month period of training and research at the National Gallery, Sylvie and Lucy have now moved to take up their respective positions at the Ferens Gallery, Hull and Auckland Castle, Bishop's Auckland.

Launched in 2011, the traineeships are the third phase of the initiative, which was established jointly by the National Gallery and Art Fund to nurture the next generation of curators.

During the time they spent at the National Gallery, Lucy and Sylvie received training on provenance research, writing labels and website text, and giving 10-minute talks. The trainees are now working on their projects at the Ferens Gallery and Auckland Castle, undertaking research into these collections and planning exhibitions and displays for the future.

Lucy studied History of Art at the University of Warwick, and completed the MA in the Arts of Florence and Central Italy 1400-1500, at the Courtauld Institute of Art. She spent a year in the Programming Team at Compton Verney, Warwickshire, and has previously interned in the Learning Department at the National Portrait Gallery.

The focus of Lucy’s traineeship at Ferens Art Gallery is a group of 20 paintings and one sculpture from the permanent collection of early religious works, which will be presented in a new gallery of Medieval, Renaissance, and Baroque art when Ferens reopens in January 2017 as part of its term as UK City of Culture.

Lucy has also been carrying out research into one of the collection’s highlights: a rare early Sienese gold-ground painting by Pietro Lorenzetti, ‘Christ between Saints Paul and Peter’.

Since Ferens acquired the painting in 2013, the panel has undergone scientific study and conservation treatment at the National Gallery. The painting will be unveiled at Ferens for the very first time when the gallery reopens in January 2017, and will be presented as part of an in-focus exhibition: Pietro Lorenzetti – Siena to Hull: A Masterpiece Revealed.

This exhibition places the panel in context and explores the flourishing artistic environment in which Lorenzetti was working around the year 1320, the period in which the Ferens panel was painted.

The exhibition is the outcome of the National Gallery Curatorial Traineeship with Art Fund support and the assistance of the Vivmar Foundation. The panel was acquired with support from the Ferens Endowment Fund and John Bradshaw Bequest, the Heritage Lottery Fund and Art Fund.

Sylvie studied English at the University of Leicester, which included a year abroad at the Università di Bologna, and went on to complete a History of Art MA at University College London. She previously held internships at an arts charity and in the commercial gallery sector. Before starting the traineeship she worked in visitor services at the National Gallery.

Sylvie is currently working on a dedicated Spanish art gallery which will open in Bishop Auckland Market Place in 2019.

Inspired by Francisco de Zurbarán’s Spanish masterpieces that hang in Auckland Castle’s Long Dining Room, the gallery will explore Spanish art from the medieval period to the present day, focusing particularly on the Golden Age of art in the 17th century.

Among the artwork due to feature in the inaugural exhibition is El Greco’s remarkable depiction of 'Christ on the Cross', as well as works by significant 17th-century Spanish artists, including Jusepe de Ribera and Francisco de Zurbarán.