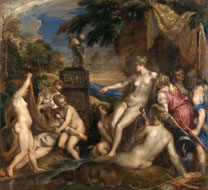 This acquisition - along with the purchase of its companion painting Diana and Actaeon in 2009 - ensures that these two superlative works by Titian will remain together on public display in either London or Edinburgh. This also means that the Bridgewater Collection - the greatest private collection of Old Master Paintings in the world – will remain intact on long-term loan at the NGS.

Both institutions were acutely aware of the challenges of launching a public campaign during such difficult economic times and therefore decided to approach individual donors and grant-making trusts in the first instance. Our initial discussions led to a number of significant pledges of support, with exceptional charitable grants being offered by the Heritage Lottery Fund (HLF), the Art Fund and The Monument Trust. We are immensely grateful to all the individuals and trusts whose generous charitable support has made this acquisition possible.

'Diana and Callisto' and 'Diana and Actaeon' have been in the UK for more than 200 years. They were both painted as part of a cycle of works for Philip II of Spain and they represent a highpoint in Italian Renaissance art. The paintings left Titian’s studio together and have only changed hands three times since then (from the Spanish Royal Collection to the Orléans collection, and then to the Bridgewater Collection at the end of the eighteenth century). The acquisition of 'Diana and Callisto' means that the pair can remain together in Britain for the enjoyment of the public in perpetuity.

The two paintings were offered by the Duke of Sutherland, to NGS and National Gallery in London on very generous terms at prices significantly lower than their market value. Having raised £50 million in 2009 to acquire 'Diana and Actaeon', the Galleries were given until December 2012 to find a similar amount for 'Diana and Callisto'. To meet this, the Trustees of the National Gallery in London made the unprecedented decision to allocate a significant proportion of their remaining reserves to this acquisition. This sum of £25m principally represents bequests left by members of the public over many years and held by the Gallery for future picture purchases.

To assist the Galleries in meeting the funding target, the Duke of Sutherland and his family have agreed to a further reduction of the asking price to £45m. By agreement with all parties a new, earlier deadline was established of the end of March 2012. The generous reduction in price, together with the commitment of the National Gallery in London’s reserves, gave both Galleries a strong basis from which to fundraise.

As a result of the joint acquisition, 'Diana and Callisto' will be shared by both institutions and displayed together with 'Diana and Actaeon' on a 60:40 rotating basis in London and Edinburgh, meaning that the public will have access to both works together. This allocation reflects the fact that a larger proportion of the funding for 'Diana and Callisto' has come from the National Gallery in London.

This acquisition and the continuation of the Bridgewater Loan, which includes masterpieces by artists such as Raphael, Titian, Rembrandt and Poussin, ensure that the NGS retains its status as one of Europe’s great destinations for any lover of Western European art. The Titian pictures have been on continuous public view in the Scottish National Gallery since they were placed there on loan in 1945 by the then 5th Earl of Ellesmere (later 6th Duke of Sutherland). The addition of these masterpieces to the collection in Trafalgar Square, which is already rich in works by Titian for all periods of his activity, establishes the National Gallery as a world centre for the study of Venetian Renaissance painting.

John Leighton, Director-General of the National Galleries of Scotland, said “It has long been an absolute priority for the National Galleries of Scotland to retain the world-famous Bridgewater loan in this country and to keep these superlative masterpieces on view for the enjoyment and inspiration of our visitors. We are delighted that the purchase of Callisto will now keep that loan intact and allows the public to continue to enjoy some of the greatest achievements of Western European art. We are hugely grateful to the HLF, the Art Fund and to all the trusts and individuals who have helped to make this possible.”

Dr Nicholas Penny, Director of the National Gallery, London, said “For more than a hundred years these two great paintings by Titian have been regarded as pre-eminent among the masterpieces in private hands in the UK. We have been able to secure both of them for the public, in a period of economic hardship, because of the esteem and affection that both institutions have enjoyed for many decades. It is a triumph for us, but also for our predecessors, made possible by today's supporters, but also by benefactors who have long departed.”

The Duke of Sutherland, said “I am delighted that these two great masterpieces by Titian will remain together as they have been since they were painted in 1556-59 and on view for the public in Britain. I congratulate the two Galleries on their success in securing these works and I would like to express my gratitude for their helpful and supportive approach. I look forward to many more years association between my family and the National Galleries of Scotland through the continuing loan of the Bridgewater Collection."

Dame Jenny Abramsky, Chair of the Heritage Lottery Fund, said "'Diana and Callisto' is an extraordinary painting and we are delighted to be helping secure it for the nation. Along with its pendant, ‘Diana and Actaeon’, it will provide opportunities for inspiration, study and learning. The icing on the cake is the continuation of the long-term loan of the Bridgewater Collection to the National Galleries of Scotland, enabling as many visitors as possible to enjoy it.”

Stephen Deuchar, Director of the Art Fund, said “The Art Fund is pleased to have played a role in ensuring that this masterpiece can continue to be on public display for future generations to enjoy. The two paintings by Titian are amongst the very finest productions of one of the greatest painters, and have influenced generations of artists over the years. By ensuring the two works remain together we greatly augment our understanding of their significance. We look forward to working with the National Galleries in Scotland and London on a major public programme which will foster widening appreciation of Titian’s incomparable achievement as an artist.”

Secretary of State for Culture, Olympics, Media and Sport Jeremy Hunt, said “This is great news. It shows what can be achieved when determination, goodwill and a tremendous amount of generosity come together. I am very pleased that we have been able to play our part by freeing up the National Gallery’s reserves, diverting more money to arts and heritage from the National Lottery and taking practical steps to encourage greater philanthropy. 'Diana and Callisto' is a breathtakingly beautiful work of art and I am immensely grateful to everyone who has helped to keep it and its companion painting 'Diana and Actaeon' in the UK in perpetuity.”

Cabinet Secretary for Culture and External Affairs Fiona Hyslop, said “Securing the long term loan of the Bridgewater Collection is fantastic news – it is great for Scotland, our cultural collections and our economy. The arrangements announced today will see both Titian paintings in Scotland for the Commonwealth Games and Year of Homecoming 2014, enticing people from both home and abroad to visit our national galleries and Scotland.”

Breakdown of funding, 'Diana and Callisto'

The Art Fund is further supporting both Galleries in the development and implementation of an innovative digital public engagement programme which will provide a wealth of contextual information enabling greater appreciation and understanding of Titian and his paintings.

For the National Gallery, London

For the National Galleries of Scotland

For the Art Fund

Breakdown of funding, Diana and Actaeon

About the Heritage Lottery Fund: Using money raised through the Heritage Lottery Fund (HLF) sustains and transforms a wide range of heritage for present and future generations to take part in, learn from and enjoy. From museums, parks and historic places to archaeology, natural environment and cultural traditions, we invest in every part of our diverse heritage. HLF has supported more than 30,000 projects allocating £4.7billion across the UK.

About the Art Fund: The Art Fund is the national fundraising charity for art, helping UK museums and galleries to buy, show and share art. Over the past 5 years, the Art Fund has given £24 million in grants for purchase and also supported a range of projects and programmes aimed at helping more people enjoy art. It is independently funded by 90,000 supporters who purchase a National Art Pass, costing from £50 which gives free entry to over 200 museums, galleries and historic houses across the country as well as 50% off major exhibitions. Find out more about the Art Fund and how to buy a National Art Pass at www.artfund.org. Media contact 020 7225 4888, media@artfund.org

DCMS: Since May 2012, the UK Government has introduced a range of measures to incentivise giving to culture, from the establishment of the new Cultural Gifts Scheme to a boost for legacy giving through measures to reduce inheritance tax liability, and simplification of Gift Aid. Together with the £100 million Catalyst programme to support endowments, facilitating access to accumulated reserves and other measures set out in the Giving White Paper, DCMS hopes to underpin the ability of museums and galleries to continue to enhance their collections through the acquisition of great works of art.