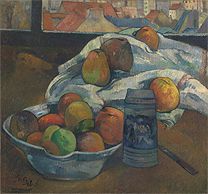 Paul Gauguin Bowl of Fruit and Tankard before a Window, probably 1890

The Simon Sainsbury Bequest to the nation goes on public display for the first time from 8 July to 5 October 2008 at Tate Britain. All eighteen paintings from the Bequest are brought together before entering the permanent collection displays at the National Gallery and Tate. The works, five of which were donated to the National Gallery and thirteen to Tate, were given by philanthropist and collector Simon Sainsbury (1930-2006), in one of the most significant bequests of paintings ever made to the nation.

The paintings which Simon Sainsbury has bequeathed to the National Gallery will make a huge difference to our Impressionist and Post Impressionist galleries. He will be remembered as one of our greatest benefactors. As a Trustee, he was outstanding in his devotion to the Gallery and during the construction of the Sainsbury Wing he was tireless in his supervision of the building work.

Simon Sainsbury was one of the UK’s most private but generous philanthropists, giving his wealth, time and experience to numerous and varied causes especially in the cultural sector. This is one of the most important gifts in the history of Tate and these outstanding works will enhance many different areas of the Tate Collection.

Works donated to the National Gallery and on display are:

Works donated to Tate and on display are:

Simon Sainsbury (1930-2006) was the great-grandson of John James Sainsbury and his wife Mary Ann Staples, the original founders of Sainsbury’s. He joined the family business in 1956 after training as a chartered accountant.

Educated at Eton and Trinity College, Cambridge, where he read History, he was a talented sportsman and a gifted pianist with a passionate interest in the arts, in particular eighteenth- and nineteenth-century architecture, and Impressionist painting. In April 1985, Simon, John and Timothy Sainsbury made the generous offer to build an annexe to the National Gallery’s Wilkins building, bringing almost thirty years of uncertainty over the site to a close.

Over the next four years, Simon Sainsbury dedicated a great deal of his time and energy to the project management of this ambitious and fundamentally important development. The Sainsbury Wing opened to the public in 1991, the year Simon became a Trustee of the Gallery.

He remained on the Board until 1998, and is remembered for his dedication and loyalty throughout this crucial period in the Gallery’s history. He also chaired the Sainsbury’s arts sponsorship panel, and gave grants to The British Museum, the Fitzwilliam Museum, the National Theatre, Pallant House, the Royal Opera House, Tate, the V&A, and the Wallace Collection, where he was Chairman of Trustees for 20 years until 1997.

Images for press use can be obtained from http://press.ng-london.org.uk. To obtain a username contact the National Gallery Press Office on 020 7747 2865 or e-mail press@ng-london.org.uk