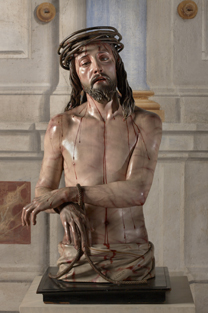 Created to shock the senses and stir the soul… 'The Sacred Made Real' presents a landmark reappraisal of religious art from the Spanish Golden Age. Paintings including masterpieces by Diego Velázquez and Francisco de Zurbarán are displayed for the very first time alongside Spain’s remarkable ‘polychrome’ (painted) sculptures.

While the religious paintings of Velázquez and Zurbarán are relatively well known, the polychrome sculptures which also emerged from 17th-century Spain have never been the subjects of a major exhibition. Still passionately venerated in monasteries, churches and processions across the Iberian Peninsula, very few of these sculptures have ever been exhibited overseas.

During the Spanish Counter-Reformation, religious patrons, particularly the Dominican, Carthusian and Franciscan orders, challenged painters and sculptors to bring the sacred to life, to inspire both Christian devotion and the emulation of the saints. The exhibition brings together some of the finest depictions of key Christian themes including the Passion of Christ, the Immaculate Conception and the portrayal of saints, notably Pedro de Mena’s austere rendition of Saint Francis Standing in Meditation, 1663, which has never before left the sacristy of Toledo Cathedral.

By installing 16 polychrome sculptures and 16 paintings side-by-side, the exhibition aims to show that the ‘hyperrealistic’ approach of painters such as Velázquez and Zurbarán was clearly informed by their familiarity – and in some cases direct involvement – with sculpture.

Last seen in Europe over 50 years ago and a crucial loan to the exhibition, Zurbarán’s masterpiece, 'The Crucifixion', 1627 (Art Institute of Chicago) achieves an astonishing sculptural illusion on canvas. When seen in close proximity with Juan Martínez Montañés’ polychrome sculpture of 1617 (Church of the Convent of Santo Ángel, Seville), these two art forms begin an intense natural dialogue.

In Seville, Francisco Pacheco taught Velázquez, later his son-in-law, and a generation of artists the skill of painting sculpture as an integral element of their training. Pacheco himself painted the flesh tones and drapery of exquisite wooden sculptures carved by fellow Andalucian, Montañés, known by his contemporaries as ‘the god of wood’. Among the most important examples is their life-size 'Saint Francis Borgia Meditating on a Skull', 1624 (Church of the Anunciación, Seville University) commissioned by the Jesuits to celebrate his beatification that year. Another highlight of the exhibition is the fascinating juxtaposition of Velázquez’s 'The Immaculate Conception', 1618–19 (National Gallery, London) with Montañés’s exquisite polychrome sculpture of the same subject, about 1620 (Seville University).

To obtain even greater realism, some sculptors such as Pedro de Mena and Gregorio Fernández introduced glass eyes and tears as well as ivory teeth into their sculptures. Fernández’s astonishingly realistic 'Dead Christ', 1625–30 (Museo Nacional del Prado, Madrid; on long term loan to the Museo Nacional Colegio de San Gregorio, Valladolid) incorporates the bark of a cork tree to simulate the effect of coagulated blood, and bull’s horn for Christ’s fingernails. It was fully intended that believers should feel truly in the presence of the dead Christ.

During 'Semana Santa' (‘Holy Week’), some 17th-century polychrome sculptures are still carried through the streets by religious confraternities, particularly in Seville, Granada and Valladolid, the most important centres of this art. During the evening of Palm Sunday, Seville’s Archicofradía del Cristo del Amor (‘Confraternity of the Christ of Love’) process a life-size sculpture of the Crucifixion by Juan de Mesa. The exhibition features a smaller version of this work, about 1621, which although non-processional, plays a vital role in the pastoral life of the confraternity.

Zurbarán’s heightened illusionism, in particular his handling of fabric, shows an acute understanding and appreciation of sculpture. Once in British collections and now returning to the UK for the first time in over 50 years, 'Saint Serapion', 1628 (Wadsworth Atheneum Museum of Art, Hartford, CT), is among the artist’s greatest achievements. The saint’s voluminous white habit cascades with astonishingly rendered crevasses of deep shadow. Here, Zurbarán demonstrates that painting can indeed achieve the same disconcerting realism as sculpture.

The religious art of 17th-century Spain pursued a quest for realism with uncompromising zeal and genius. Far from being separate, this exhibition proposes that the arts of painting and sculpture were intricately linked and interdependent.

An accompanying Room 1 exhibition explores the technical aspects of making a polychrome sculpture, from its intricate carving, through the gessoing process to the final touches of paint which render the sculpture ‘real’. For further information, a separate press release is available.

Support
The exhibition is supported by the American Friends of the National Gallery as a result of a generous grant from Howard and Roberta Ahmanson.

With the support of the Spanish Tourist Office.

'The Sacred Made Real' (ISBN: 978 1 85709 422 0)
The exhibition is accompanied by a landmark catalogue examining the creative relationship of sculptor and painter, the religious role of polychrome sculpture and the technical challenges involved in its creation. Featuring approximately 180 colour illustrations including paintings by Pacheco, Ribera, Velázquez and Zurbarán alongside unique photography of polychrome sculpture by Gregorio Fernández, Juan de Mesa, Juan Martínez Montañés, Alonso Cano and Pedro de Mena.

The special photography of sculptures reproduced in the catalogue was generously supported by a grant from The Henry Moore Foundation.

Tickets
For advance tickets to The Sacred Made Real please visit www.nationalgallery.org.uk or call 0844 209 1778 (booking fee). You can also book tickets by post and in person from the Gallery.