The National Gallery has acquired the archive of art dealers Thomas Agnew & Sons Ltd following the firm’s decision to close its Albemarle Street gallery in 2013. The archive, which dates back to the 1850s, consists of detailed stockbooks, daybooks, diaries and huge leather-bound account ledgers that give unprecedented insight into the activity of one of the world’s most important international art dealers. It complements the National Gallery’s own rich archive and establishes the Gallery as a centre of research for the study of collecting, the art market, taste and provenance. Researchers will benefit from improved access to an outstanding and little-studied collection spanning more than 150 years of history. 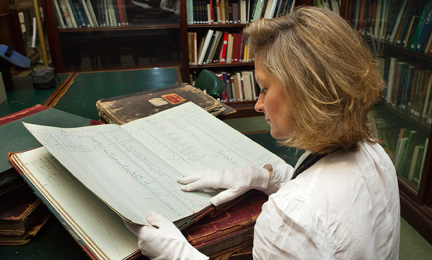 Agnew’s archive provides a remarkably detailed record of the activities of the firm, which during its history has had branches in London, Manchester, Liverpool, Paris, New York and Berlin. It includes the records of famous paintings that have passed through Agnew’s, including Velázquez’s ‘The Toilet of Venus ('The Rokeby Venus')’ and Bellini’s 'The Feast of the Gods'. It also holds information about the company’s involvement with major collectors from around the world. Exceptionally, Agnew’s has remained a family firm from its inception and the archive includes items of a more personal or immediate nature, such as Victorian diaries of overseas trips. Letters and digital information will complete the record through the 20th century up to the end of 2013, the later material being transferred to the National Gallery in stages over the next three decades.

The archive was offered at a discounted price of £240,000, for which sum it was generously purchased and donated to the Gallery by the National Gallery Trust.

“I am delighted that our fascinating archive has found such a prestigious permanent home, where the records of the firm and of its influence on the history of taste and collecting will be available to both scholars and the general public.”

“Agnew’s has been at the centre of the art trade for almost 200 years and importantly during the late 19th century and early 20th century when major shifts in collections between the UK and USA were taking place. As the largest and most influential dealer of its age, the information held within the archive is of international significance and has outstanding research value.”

The addition of Agnew’s archive to the National Gallery Research Centre is significant in that it is the first time the Gallery has collected an archive that is not closely bound to its own history. The Gallery will catalogue the archive, and this is expected to be completed within two years. However, the Gallery aims to make the archive as accessible as possible during that time.

The National Gallery is a pre-eminent centre for the research of paintings in the Western European tradition from the 13th to the early 20th century. It has established a new research centre to support its research strategy and ensure that its research resources are made available to the widest possible audience, including both national and international visitors and digital users, as well as Gallery staff. The National Gallery Research Centre will have primary responsibility for managing, conserving and providing both physical and digital access to the Gallery’s outstanding archive and library collections. The Gallery’s archive catalogue is already available online, providing information that date back to its foundation in 1824. Research Centre staff are also engaged in planning and supporting academic programmes including seminars, colloquia, study days and conferences, as well as working closely with research-active staff across the National Gallery, academic partners and collaborators.

Further information about the Gallery’s Research Centre and specific research themes and scholarship.

The family firm of Agnew’s grew from a partnership entered into by Thomas Agnew (1794–1871) and Vittore Zanetti, an Italian print seller, picture-frame maker, gilder and dealer in Old Master paintings. The partnership was dissolved in 1835, leaving Agnew as the business’s sole proprietor. Under his stewardship, the business expanded from its base in Manchester to become one of the country’s leading print sellers and publishers while also offering services such as framing, and it was at this time that the firm began to deal in contemporary British paintings, selling these to the new rich industrialists in the north of England.

In 1851, the business became Tho(ma)s. Agnew and Sons with Thomas Agnew’s sons William and Thomas at the helm. The company flourished, dealing principally in Old Master paintings and drawings, with a London branch opening in 1860 and the company taking up its main residence in 1877 in its purpose-built Bond Street gallery. The firm expanded during the 19th century to become one of the major dealers in the international art market with offices around the world. These were closed down in 1932 following the market crash and all activities were moved to London. The partnership became a limited company, which enabled it to survive the difficult years of the depression and the Second World War. In the post-war years it regained its place in the international market where it has remained until the present day.

About the National Gallery Trust

For further press information please contact Lizzie Phillips on 020 7747 2532 or at lizzie.phillips@ng-london.org.uk

Publicity images can be obtained from the Press Office Image Archive. To obtain a username please contact the National Gallery Press Office on 020 7747 2865 or email press@ng-london.org.uk