Inspired by the national collection and his love for Joseph Mallord William Turner’s painting The Evening Star, he charts a personal journey of deep admiration for colour, composition, and the power of painting. 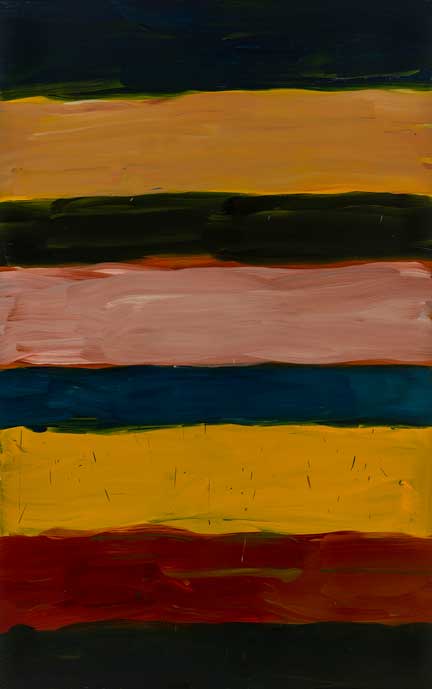 One of the world’s foremost contemporary artists, Sean Scully’s work draws on the traditions of European painting, invigorated with the distinct character of American abstraction. His varied practice encompasses printmaking, sculpture, watercolours, and pastels, but he is best known for rich, monumental abstract paintings in which stripes or blocks of layered colour are a prevailing motif.

Turner’s masterpiece, a continuing influence and catalyst for new work by Scully, will be displayed in the first gallery. The painting was specifically identified by him as a source of inspiration after he was first approached by the National Gallery, following a critically acclaimed exhibition at the Venice Biennale in 2015.

Featuring new and recent large-scale, multi-panel paintings that include his celebrated 'Landline' paintings, as well as works on paper, the exhibition will demonstrate Scully’s distinctive approach to painting and a shared love of colour and composition with Turner.

The 'Landline' paintings encompass one of Scully’s recurring themes developed from his interest in the meeting points of land, sea and air, the rhythm of the ocean and the ever-changing horizon. The single figure of a boy on the shore setting off for home as sky and sea darken in Turner’s 'The Evening Star' (1829–30), echoes this preoccupation.

“I am always looking at the horizon line – at the way the end of the sea touches the beginning of the sky; the way the sky presses down on to the sea… I think of land, sea, sky. And they always make a massive connection. I try to paint this; this sense of the elemental coming together…”

Scully's abstract works are created from panels painted in oil, often with thickly applied paint to create rich, textured surfaces. Echoing the strong impasto found in Turner’s pink-hued sky, the artist’s fluid handling of his medium and the powerful movement as he paints are visible in the blues of 'Landline Pool' (2018) and 'Landline Star' (2017), a painting whose title evokes the star found in Turner’s painting.

Since 2016, Scully has been painting on aluminium and copper. Not absorbing paint in the way canvas or paper does, the metallic surface responds to the material in a unique way, giving the impression that the paint is still wet. The glow of metal which can occasionally be found between layers of paint is reminiscent of the use of translucent oils in Turner’s seascapes. Further new works include 'Robe Blue Blue Durrow' (2018), which suggests the seventh-century 'Book of Durrow' from his native Ireland, and 'Human 3' (2018), inspired by the New York subway in his adopted country.

Sea Star: Sean Scully at the National Gallery continues to demonstrate the importance of contemporary artists engaging with the collection and creating work that explores both the old and the new. The picture that connects the national collection to the contemporary art of Scully is itself an example of the change from past to present. 'The Evening Star' had previously been regarded as unfinished upon the artist’s death, but was heralded as a masterpiece years later. It will now take its place at the centre of this exhibition with works by an artist who has studied its atmosphere in detail.

Spending his childhood in London with family trips to Trafalgar Square, Scully has had a deep and long-held relationship with the National Gallery, as well as with Turner. While their biographies only slightly mirror each other – their fathers were both barbers and both frequently visited the Kent coast – Scully’s first exhibition at the National Gallery will allow visitors to investigate the influence of Turner on his work, both before and after he had chosen to respond to 'The Evening Star'.

“Sean Scully is an abstract painter and while at first it might seem strange to be showing his work in a collection of representational paintings, his sensuously painted bands of vibrant colour carry evocations of the gentle swell of the sea or of the night sky, or the appearance of fabrics wrapped around the human body.

This exhibition of Scully’s paintings, pastels, and prints with their deep connections to the traditions of Western painting, will allow visitors to see how the work of one the finest painters working today, emerges from the past. At the same time, Scully’s work enables us to appreciate the hidden abstraction in the work of great artists of the past, not least Turner, whose pioneering work has often been seen as anticipating the great abstract painters of the last century.

“When we asked Sean Scully to conceive an exhibition for the National Gallery, he immediately responded that he wanted to pay homage to Turner. Perhaps this is hardly surprising; Turner’s bold experimentation with colour, light, and landscape opened up remarkable possibilities for abstract painting. Scully’s work looks forward as well as to the past.”

The collection has always provided a source of inspiration for artists and Sea Star: Sean Scully at the National Gallery will be an opportunity for the artist to engage with a work that holds an importance to him both personally and professionally. He joins other contemporary artists who have recently collaborated with the National Gallery including Tacita Dean, Chris Ofili, Bridget Riley (who unveiled her new work Messengers in Annenberg Court at the beginning of the year), Ed Ruscha, and George Shaw.

The exhibition is part of the Gallery’s Modern and Contemporary Programme for 2018–19 and follows 'Rachel Maclean: The Lion and The Unicorn' which closed at the beginning of February.

Christian and Florence Levett
Dasha Shenkman OBE
And other donors

The Sunley exhibition programme is supported by

Sean Scully’s Sheerness (a text by the artist reflecting on Turner):

I met my father one day in Sheerness when I was about 8 years old. We, my brother and I, had been staying in a children’s holiday camp. When my parents came to visit us, I went for an intimate and almost loving walk out into the land left by the retreating sea with my dad. It was memorable because it was rarity personified; that I would spend a happy hour in the company of my father. As we walked, our feet slapped against the sand left sodden by the outward tide, and we were enthralled by all the evidence of the life below us. Of all those creatures who live down, tunnelling in the depths of the wet sand. We advanced, and as we did, we approached the sea, still retreating. We strolled side by side, into a vast sculpted painting. Whose constitution of wet sand, humid air, rolling waves and sad end of day yellow grey light: stunned us. We stood for a chilly moment, before we turned around, joined in our wonder. Standing almost on water.
Later in life, when I became an artist, I recognized this inexplicable theatre, in small rectangles by Turner, hanging on museum walls. As if, using a magician’s brush, he had carved them out of the sea and the sky. And brought them back intact.
Sean. NY. 2.15.19