One of the greatest works by the Italian Baroque master Domenichino (1581–1641) is to remain in Britain and is now on public display in Room 32 of the National Gallery, having been acquired by an anonymous private collector. 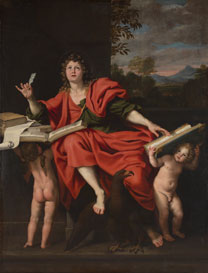 This is a tremendous outcome for the nation and a triumph of collaboration between the Reviewing Committee on the Export of Works of Art and Objects of Cultural Interest (RCEWA) and the anonymous private collector, resulting from the application of the ‘Ridley Rules’.

Saint John the Evangelist (1620s) is the finest painting by Domenichino to remain in private hands and the most important example of his work in this country. Measuring 259 x 199 cm, this monumental oil painting is a must-see highlight for visitors to the Italian Baroque rooms of the National Gallery.

"Depictions of divine inspiration were a mainstay of Baroque artists, and the heroic pose and focused, serene gaze of Domenichino’s figure make it one of the finest interpretations of the classical tradition.

"Although Domenichino is well represented in UK public and private collections, none of the paintings can equal the grand scale and conception of this, one of his greatest easel paintings. It is undoubtedly the best work by the artist remaining in private hands and its export would have been lamentable for the representation of Italian Baroque painting in this country."

This successful outcome comes just months after the Reviewing Committee on the Export of Works of Art and Objects of Cultural Interest (RCEWA) placed an export licence deferral on the painting, owing to its outstanding aesthetic importance. It had already been sold to an overseas buyer for £9,225,250 at an auction in December 2009.

With the export licence deferral in place, a new collector came forward wishing to acquire the painting, to keep it in the UK and to make provision for its regular public display.

This agreement was made in accordance with the ‘Ridley Rules’, which can only be applied after it is clear that no UK institution is able to raise sufficient funds to acquire a work. The Ridley Rules then allow for offers from private individuals, who will guarantee public access to the painting for 100 days within a 12-month period.

In the first phase of this arrangement, the painting will be on display at the National Gallery from 10 May 2010 for a period of 18 months.

"I want first of all to pay tribute to the private collector who has had the imagination and confidence to take this step. I hope that their example will be followed. They have acted in exactly the way that the Reviewing Committee has hoped.

"I also want to record my admiration for the Reviewing Committee, currently chaired, firmly and fairly, by Lord Inglewood. This committee operates independently, promptly and conscientiously without any rewards. The result is a triumph for the National Gallery, but also for enlightened legislation and its efficient administration."

Domenico Zampieri (1581–1641), known as Domenichino, was one of the most important Italian artists of the 17th century, and was particularly celebrated for his religious and mythological compositions.

Saint John the Evangelist is a key masterpiece which epitomises the grandeur and nobility of Roman Baroque painting. The saint, author of the fourth gospel, is shown in a moment of revelation, his pen poised, his eyes lifted towards the source of his inspiration. At his feet is his attribute, an eagle, the bird thought to fly closest to heaven. The landscape behind him presumably represents the island of Patmos, where John was exiled by Domitian and where he is believed to have written the Apocalypse.

The painting is striking for its monumental size, its arresting composition, the inspired expression of the Saint’s countenance, and the splendour of the colouring – particularly the rich red of his robe. It is related to Domenichino’s great pendentive frescoes in the Roman church of Sant’Andrea della Valle (1624–5) which had a strong influence on later European artists.

It was painted for the Giustiniani family, who rank among the most important collectors and patrons in Rome in the first half of the 17th century (they were also great patrons of Caravaggio). 'Saint John the Evangelist' entered the UK in the early 19th century, and in its most recent history the painting was hung in the organ room at Glyndebourne, East Sussex.

The National Gallery has several works by Domenichino, including three small paintings (Landscape with Tobias laying hold of the Fish (about 1610–13), Saint George killing the Dragon (about 1610) and The Vision of Saint Jerome (before 1603) and eight scenes in fresco executed with assistants (Apollo slaying Coronis, The Judgement of Midas, The Transformation of Cyparissus, Apollo pursuing Daphne, The Flaying of Marsyas, Apollo and Neptune advising Laomedon, Apollo killing the Cyclops and Mercury stealing the Herds of Admetus (all 1616–18).

For further information on the Reviewing Committee on the Export of Works of Art and Objects of Cultural Interest (RCEWA), visit www.culture.gov.uk