Abrosius Bosschaert The Elder, 'A Still Life of Flowers in a Wan-Li Vase on a Ledge with further Flowers, Shells and a Butterfly', 1609–10

Accepted by HM Government in Lieu of Inheritance Tax and allocated to the National Gallery, 2010

The National Gallery, London, has been allocated A Still Life of Flowers in a Wan-Li Vase on a Ledge with further Flowers, Shells and a Butterfly, 1609–10, by Ambrosius Bosschaert The Elder (1573–1621), under the Acquisition in Lieu scheme. 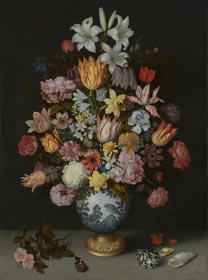 Ambrosius Bosschaert the Elder, A Still Life of Flowers in a Wan-Li Vase, 1609-10

Bosschaert is one of the first and finest Dutch flower painters. Specialising in appointing precise flower and fruit still-lifes in the manner of botanical illustrations, he grouped compositions that carefully balanced form and colour.

Born in Antwerp, he moved to Middelburg where he became a member of the painters’ guild in 1593. As well as being a painter, Bosschaert also acted as a dealer, buying and selling both Dutch and foreign paintings. In 1621 he travelled to The Hague to deliver a flower vase which he had designed for the Prince of Orange’s Chamberlain, and died there that year.

Bosschaert’s lush bouquets are often flanked by seashells from foreign locales or other costly treasures. The artist drew on inspiration from botanical gardens, for which early 17th-century Middleburg was renowned, and from exotic wares imported by the Dutch East India Company.

A Still Life of Flowers in a Wan-Li Vase is unusually large for Bosschaert. Painted on copper, it depicts in a broadly symmetrical composition a vase of flowers including, at the top of the composition, a stem of white Madonna lilies, tulips, roses, narcissi, carnations, bluebells, marigolds and lilies-of-the-valley. They are all depicted with near scientific accuracy, as are the insects and the caterpillar that can be found among the blooms.

A Red Admiral butterfly is shown on the shelf supporting the vase as well as some rare shells, which would have been known in Holland from examples brought back from East Asia. At the time, all these items and flowers would have been recognised for their rarity and exotic nature, as would the Chinese vase in which the flowers sit.

On stylistic grounds the painting has been dated 1609–10, when Bosshaert was at the height of his powers. The smooth surface of the copper panel enhances the artist’s precise technique and gives a jewel-like brilliance to the brightly coloured flowers. A Still Life of Flowers in a Wan-Li Vase represents a highly significant component of Bosschaert’s known output, which consists of about 50 works.

This painting joins one other work by Bosschaert already in the National Gallery’s collection: Flowers in a Glass Vase, 1614.