A portrait by Sir Thomas Lawrence that has never been on public display since it was painted over two hundred years ago is now available for visitors to enjoy at the National Gallery in Room 34. 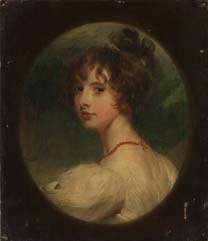 Portrait of the Hon. Emily Mary Lamb (1787–1869), 1803, has been allocated to the National Gallery by Arts Council England under the Acceptance in Lieu scheme, which allows donors to leave major works of art to the nation in lieu of inheritance tax.

Sir Thomas Lawrence (1769–1830) is generally regarded as one of the finest European portraitists of the late 18th and early 19th centuries, portraying some of the most important personalities of his day.

This work is an important addition to the National Gallery’s British collection. The Gallery currently holds examples of formal and full-length works by Lawrence – John Julius Angerstein, aged about 55, about 1790; John Julius Angerstein, aged over 80, 1824; and Queen Charlotte, 1789 – but this painting exemplifies Lawrence’s influential but more informal depiction of children and families.

Its inclusion in the collection will enable Gallery visitors to appreciate the breadth of Lawrence’s repertoire. The oval portrait depicts the 16-year-old sitter in motion, her head turned towards the viewer in a pose that has a long tradition in the history of portraiture. However, Lawrence brings a freshness to the work, reflected in the informality and economy of his brushwork.

The Hon. Emily Lamb went on to become an influential, politically prominent society hostess. She first married Peter Leopold Clavering-Cowper, 5th Earl Cowper. After his death, in 1839 she married Henry John Temple, 3rd Viscount Palmerston, who served twice as Prime Minister between 1855 and 1858 and again from 1859 to 1865. Her brother, Viscount Melbourne, also served as Prime Minister. His wife, Lady Caroline Lamb, was notorious for her affair with Lord Byron. The work was commissioned by the subject’s father, Peniston Lamb, 1st Earl Melbourne, whose image can also be seen in the Gallery represented in a work by Stubbs, The Milbanke and Melbourne Families, about 1769. Lawrence’s painting has been in the possession of the sitter’s descendants since its completion.

About the artist: Born in Bristol, Lawrence was largely self-taught and a child prodigy; he was already producing accomplished portraits in crayon aged 10. He went on to become a pupil at the Royal Academy at the age of 18 and exhibited his first portrait the following year. He had a distinguished career during which he became a member of the Academy, going on to become its president in 1820. He was appointed Painter-in-Ordinary to King George III and received a knighthood in 1815.

About Arts Council England: Arts Council England champions, develops and invests in artistic and cultural experiences that enrich people’s lives. They support a range of activities across the arts, museums and libraries – from theatre to digital art, reading to dance, music to literature, and crafts to collections. Great art and culture inspires us, brings us together and teaches us about ourselves and the world around us. In short, it makes life better. Between 2011 and 2015, they will invest £1.4 billion of public money from government and an estimated £1 billion from the National Lottery to help create these experiences for as many people as possible across the country. www.artscouncil.org.uk