This is the earliest of four known portraits of John Julius Angerstein (1735–1823) by his friend Thomas Lawrence, probably painted around 1790 when Lawrence was about 20. It seems to have been painted impromptu on top of an unfinished portrait of a different man, which is now starting to show through the paint. Lawrence’s last portrait of Angerstein depicts him at the age of 84 and is also in the National Gallery’s collection. Lawrence was repeatedly in debt and Angerstein frequently lent him money, most of which Lawrence never paid back.

The son of a German doctor, Angerstein was born in St Petersburg in 1735 and was the chairman of Lloyd’s of London from 1790 until 1796. He developed a passion for art, and after his death the British government purchased his collection of 38 paintings for the nation. It became the nucleus of the National Gallery’s collection.

John Julius Angerstein was 35 years older than the painter Thomas Lawrence, and became his friend and patron shortly after Lawrence’s arrival in London in 1787. Lawrence portrayed Angerstein, his family and his circle of close friends many times.

The son of a German doctor, Angerstein was born in St Petersburg in 1735 and is believed to have come to London in 1750. He was instrumental in the development of the insurance brokers Lloyd’s of London, of which he was the chairman from 1790 until 1796. Angerstein was wealthy but not ostentatious in either dress or lifestyle, and he devoted much of his income to charitable work. He did, however, develop a passion for collecting paintings, and Thomas Lawrence and the painter Benjamin West (1738–1820) may have advised him in his acquisitions.

Many of Angerstein’s earlier purchases of pictures for his collection were by British artists. The earliest portrait of Angerstein is by Reynolds, who portrayed him in 1765. Angerstein also owned Hogarth’s Marriage A-la-mode and his Self Portrait with a Pug (Tate, London), and three monumental paintings by the Swiss painter Fuseli (1741–1825) of scenes from Milton’s Paradise Lost.

Angerstein became most active as a picture buyer in the years following the French Revolution, which brought an immense number of works onto the art market. He purchased the giant Raising of Lazarus by Sebastiano del Piombo from the sale of the Orléans collection in 1798. He also bought from dealers who imported art, which was how he acquired Claude’s Landscape with the Marriage of Isaac and Rebekah (‘The Mill’) and its pendant Seaport with the Embarkation of the Queen of Sheba, considered among the most famous paintings in his collection. He also owned Claude’s Seaport with the Embarkation of Saint Ursula, Landscape with Cephalus and Procris reunited by Diana and A Seaport. In the sale of the late Sir Joshua Reynolds’s collection, he bought Van Dyck’s Portrait of George Gage with Two Attendants. By 1804, Angerstein’s collection, at that stage consisting of only 25 paintings, was said to be the best and most celebrated collection in Great Britain.

After Angerstein’s death, the British government purchased the Angerstein collection of 38 paintings for the nation with the intention of using it as the foundation of a National Gallery. The Gallery was first housed in Mr Angerstein’s former home at 100 Pall Mall before moving to its current location in Trafalgar Square. 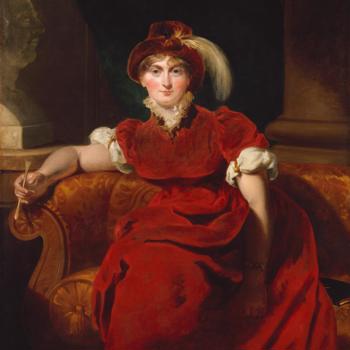