“Hide them in caves and cellars, but not one picture shall leave this island”. (Winston Churchill, 1940) 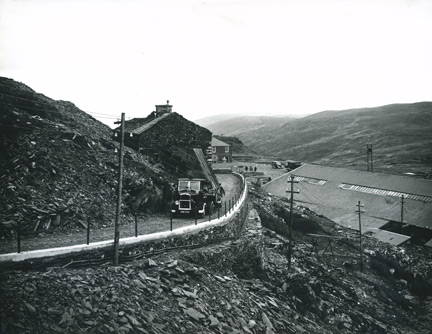 In 2018, the National Gallery will recall a remarkable chapter in its history when, during the Second World War, its paintings were removed for safekeeping to a disused slate mine in Snowdonia.

Twenty-four archival photographs documenting the dispersal of paintings to Manod near the town of Blaenau Ffestiniog in Wales, together with five photographs of the quarry as it appears today by Robin Friend, will be displayed in the Annenberg Court

Central to the exhibition is a 30-minute film, 'Winged Bull in the Elephant Case', directed by photographer Robin Friend, choreographer Wayne McGregor CBE and Rhodri Huw, which is a Studio Wayne McGregor / Illuminations production commissioned by BBC Television and Arts Council England as part of the 'Performance Live' strand. Filmed in a slate mine in Snowdonia and also in the National Gallery, 'Winged Bull in the Elephant Case' follows the journey of a National Gallery painting that has taken human form, as it tries to save its friends and get back home to London. This immersive performance for the screen features choreography from Wayne McGregor, Charlotte Edmonds, Botis Seva and Bonetics, performed by Company Wayne McGregor, Alessandra Ferri, Bonetics, and Far from the Norm. The original music is by Joel Cadbury with performances by pianist Joanna MacGregor and cellist Tunde Jegede, and spoken word performed by Isaiah Hull. 'Winged Bull in the Elephant Case' considers the lengths we will go to in order to preserve our cultural heritage; an issue that is particularly relevant today.

'Winged Bull in the Elephant Case' will premiere on BBC2 at 10pm on Saturday 3 March 2018.

The National Gallery in wartime

In the summer of 1940 the outlook seemed bleak for the Allies in mainland Europe. The British army had been forced into retreat at Dunkirk, whilst France and the Low Countries fell to Germany. The invasion of Britain looked imminent, so a plan was needed to protect the national art collection.

One proposal was for the paintings to be evacuated by ship to Canada, but the possibility of U-boat attacks worried the Gallery’s director, Kenneth Clark. He went to see Prime Minister Winston Churchill who immediately vetoed the idea.

The Manod mine fitted the bill of hiding place perfectly. Explosives were used to enlarge the entrance in order to accommodate the largest paintings and several small brick ‘bungalows’ were built within the caverns to protect the paintings from variations in humidity and temperature. Special ‘elephant’ cases were constructed to safely transport the paintings on trucks to Wales. By the summer of 1941, the whole collection had been reunited in its new subterranean home, where it was to remain for four years.

Valuable discoveries made during this time were to influence the way the Collection was displayed and cared for when it returned to London after the war ended in 1945. It had long been known that paintings are happiest in conditions of stable humidity and temperature, but it had never been possible to monitor a whole collection in such controlled circumstances before. Air conditioning was included in the plans for the major renovations needed for west wing of the National Gallery, which had been badly damaged during bombing raids, and the Scientific Department (which had been established shortly before the war) was joined by a newly-formed Conservation Department.

'Hundreds of feet underground, the Manod slate mine is an extraordinary subterranean space in north Wales. Robin Friend’s photographs convey the wonder of this secret and labyrinthine world, where for four years during the Second World War, the National Gallery hid their collection for safe-keeping. Underground spaces have often been a repository for our most precious objects; as the BBC launches its new ‘Civilisations’ series, this is an opportunity to reflect on this idea of preserving the past for future generations.'

'The Nation’s Treasure Caves' is part of the Civilisations Festival: an exciting partnership between museums, galleries, libraries and archives and the BBC to coincide with the broadcast of BBC Arts' 'Civilisations' series in spring 2018.

Kenneth Clark – Director of the National Gallery during World War II – was the presenter of the iconic 1969 BBC television series 'Civilisation', which thrilled audiences with its authoritative interpretation of the glories of Western art.

Produced and developed in partnership with Arts Council England and Battersea Arts Centre, 'Performance Live' will showcase on BBC 2 a spectrum of some of the most exciting artists working in performance today. This two-year strand of programmes features the works of over a dozen artists, producers and arts organisations from across England, who have embraced the challenge of producing innovative pieces of live performance for television.