The late artist Lucian Freud has left a treasured painting by Jean-Baptiste Camille Corot as a thank you to Great Britain for welcoming his family when they arrived as refugees in 1933. 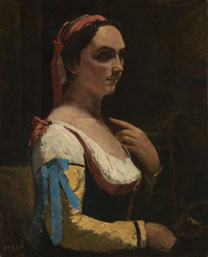 Freud's Jewish family moved from Berlin to London to escape the rise of Nazism when he was 11. He became a British citizen in 1939 and went on to become one of last century's finest painters before his death aged 88, in July 2011.

The Arts Council England have allocated the painting, L'Italienne ou La Femme à la Manche Jaune (The Italian Woman, or Woman with Yellow Sleeve), to the National Gallery under the Acceptance in Lieu scheme, which allows people to transfer works of art and important heritage objects into public ownership in lieu of inheritance tax. Freud specified in his will that he wanted the painting to have its new home in the National Gallery so it could be enjoyed by future generations.

'This painting is a great addition to the National Gallery where, although we have a very strong collection of Corot’s works, we have no example of a late figure painting of this kind. Its rough-hewn monumentality and abrupt transitions anticipate Picasso’s exercises in the classical manner and make it one of the most modern looking paintings in the collection. Freud was a frequent visitor to the Gallery and had an exact idea of the impact that this bequest would make.'

'L'Italienne ou La Femme à la Manche Jaune (The Italian Woman, or Woman with Yellow Sleeve)' was painted in Corot's Paris studio and dates from the last years of his life. It depicts a distinctive looking woman, turning away and gazing into the distance. The painting is a fantastic example of Corot’s later works – he often painted peasant figures, drawing upon the heroism of mythological paintings.

'L’Italienne' (about 1870) was bought by Lucian Freud at an auction in 2001, and then hung on the top floor of his London home. It hasn't been shown in public since it was on display in the Louvre, Paris, in 1962.

The portrait joins 20 paintings by Corot currently in the National Gallery's collection, which range from a sketch made during his first trip to Italy to a ‘souvenir’ landscape of 1874. In addition to these the Gallery has the late, great decorative panels The Four Times of the Day on loan from the Loyd Collection.