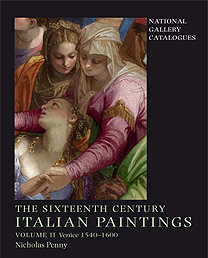 This volume catalogues paintings made by the greatest artists who were active in Venice between 1540 and 1600, and includes some of the most important Italian paintings in the National Gallery Collection – for example, Titian’s 'Vendramin Family venerating a Relic of the True Cross' and 'The Death of Actaeon', Veronese’s 'Family of Darius Before Alexander' and his four 'Allegories', and Tintoretto’s 'Origin of the Milky Way'.

All the major types of painting produced in the city are discussed here: the altarpiece, the confraternity chapel decoration, the ceiling painting, paintings from the portego (the long central hall of a palace), the portrait and furniture painting. Entries are punctuated by headings designed to help readers select the topics that interest them: the materials, technique and condition of the work; pictorial and literary sources; related works and commentaries; owners, patrons and critics; framing and display.

In the process, the author offers new discoveries, insights and observations. For example, the quality of Veronese’s 'The Rape of Europa', long considered a copy, was revealed by recent cleaning. Conversely, examination of 'A Concert' with infrared photography has revealed the royal stamp confirming that it was formerly in the collection of King Charles I, when it was almost certainly considered to be by Titian; it is now assigned to an imitator.

Dr Penny’s familiarity with the National Gallery Collection and archives is matched by his wide frame of reference; a discussion of Titian’s 'Death of Actaeon' finds parallels with Constable’s sketches, while the design of a fountain in Veronese’s 'Family of Darius' is compared to a bronze well-head remaining in the Doge’s Palace, Venice, today.

Some of the most revealing descriptions are of how a picture first entered the National Gallery, and the rise (or fall) of its reputation. Many of these paintings have passed through some of the greatest collections in Europe, most notably those of Emperor Rudolph II, in Prague, of Queen Christina of Sweden and of the Duc d’Orléans. The stories behind their provenance, and their acquisition by the National Gallery, represent key episodes in the history of European taste, and are an important contribution to the history of the Gallery itself.

The catalogue has been funded with a grant from the American Friends of the National Gallery, and made possible by a generous donation from Arturo and Holly Melosi through the Arthur and Holly Magill Foundation.

The book is available for purchase online at the National Gallery shop.