Portraits make up a third of Goya’s output – and more than 150 still survive today – but there has never been an exhibition focusing solely on Goya’s work as a portraitist, until this autumn when almost half this number will come together at the National Gallery, London. 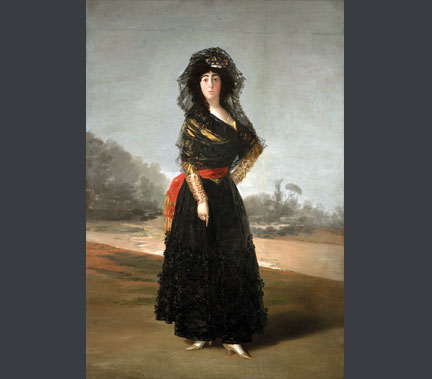 Francisco de Goya y Lucientes (1746–1828) is one of Spain’s most celebrated artists. He was an incisive social commentator, considered (even during his own lifetime) as a supremely gifted painter who took the genre of portraiture to new heights. Goya saw beyond the appearances of those who sat before him, subtly revealing their character and psychology within his portraits.

Born before Mozart and Casanova, and surviving Napoleon, Goya’s life spanned more than 80 years during which he witnessed a series of dramatic events that changed the course of European history. 'Goya: The Portraits' will trace the artist’s career, from his early beginnings at the court in Madrid to his appointment as First Court Painter to Charles IV, and as favourite portraitist of the Spanish aristocracy. It will explore the difficult period under Joseph Bonaparte’s rule and the accession to the throne of Ferdinand VII, before concluding with his final years of self-imposed exile in France.

“The aim of this exhibition is to reappraise Goya’s status as one of the greatest portrait painters in art history. His innovative and unconventional approach took the art of portraiture to new heights through his ability to reveal the inner life of his sitters, even in his grandest and most memorable formal portraits.’’

This landmark exhibition will bring to Trafalgar Square more than 60 of Goya’s most outstanding portraits from both public and private collections around the world. These include works that are rarely lent, and some which have never been exhibited publicly before, having remained in possession of the descendants of the sitters. The exhibition will show the variety of media Goya used for his portraits; from life-size paintings on canvas, to the miniatures on copper and his fine black and red chalk drawings. Organised chronologically and thematically, we will for the first time be able to engage with Goya’s technical, stylistic, and psychological development as a portraitist.

From São Paulo to New York, and Mexico to Stockholm, private and institutional lenders have been outstandingly generous, including 10 exceptional loans from the Museo del Prado, Madrid. One of the stars of the show will undoubtedly be the iconic 'Duchess of Alba' (The Hispanic Society of America Museum & Library) (pictured), which has only once left the United States and has never travelled to Britain. Painted in 1797, this portrait of Goya’s close friend and patron shows the Duchess dressed as a 'maja', in a black costume and 'mantilla' pointing imperiously at the ground where the words ‘Solo Goya’ (‘Only Goya’) are inscribed.

Other patrons who assisted Goya on his upward trajectory to become First Court Painter, as Velázquez had done more than 150 years before him, are well represented: these include 'The Count of Floridablanca' (Banco de España, Madrid) and 'The Duke and Duchess of Osuna and their Children' (Museo Nacional del Prado, Madrid) – both key and influential patrons. The immense group portrait of 'The Family of the Infante Don Luis de Borbón' (Magnani-Rocca Foundation, Parma), will be reunited with some of the other portraits Goya painted of the Infante’s young family who were living in exile from the Spanish court.

Other highlights will include the charismatic portrait of 'Don Valentin Bellvís de Moncada y Pizarro' (Fondo Cultural Villar Mir, Madrid) which is unpublished and has never been seen before in public, and the rarely exhibited 'Countess-Duchess Benavente' (Private Collection, Spain). The recently conserved 1798 portrait of Government official 'Francisco de Saavedra' (Courtauld Gallery, London) will be exhibited for the first time in more than 50 years alongside its pendant painted in the same year, showing his friend and colleague 'Gaspar Melchor de Jovellanos' (Museo del Prado, Madrid).

'The Countess of Altamira and her daughter, María Agustina', which has never been lent internationally from the Lehman Collection at the Metropolitan Museum of Art, New York, will come to Europe for the very first time to be reunited with her husband 'The Count of Altamira' (Banco de España, Madrid) and their son 'Manuel Osorio Manrique de Zuñiga' (The Metropolitan Museum of Art, New York), wearing a fashionably expensive red costume and playing with a pet magpie (which holds the painter's calling card in its beak). It was shortly after completing his imposing portrait of the Countess, wearing a shimmering embroidered silk gown and shown with an introspective expression, that Goya was appointed court painter to Charles IV, King of Spain.

It was in his royal portraits in particular that Goya managed to combine his insightful observation and technical refinement to create unique, memorable portraits; in these he condensed the various aspects of his sitter’s personality into a subtle look or gesture, which often did not flatter his sitters. 'Charles III in Hunting Dress' (Duquesa del Arco) stands in a pose directly inspired by Velázquez’s hunting portraits of the Spanish royal family in the previous century, but the candid portrayal of a weather-beaten face with its marked wrinkles and a somewhat ironic gesture is unique to Goya, clearly revealing to us the personality of the King – an enlightened man, a lover of nature and his people, who wished to be approached as ‘Charles before King’. Similarly, in the portrait of 'Ferdinand VII' (Museo del Prado, Madrid) we can imagine Goya’s mistrust of the pompous and selfish monarch who abolished the constitution and reintroduced the Spanish Inquisition.

In contrast to the formality of his royal portraits, the exhibition also features more personal works by Goya, including a number of self-portraits in different media, and depictions of his friends and family. 47 years lie between the first 'Self Portrait' (about 1773, Museo Goya, Colección Ibercaja, Zaragoza) in the show, completed when Goya was in his late 20s, and the last, the poignant 'Self Portrait with Doctor Arrieta' (1820, The Minneapolis Institute of Art) painted after an illness from which he almost died when he was 74 years old. There will also be a chance to ‘meet’ the people who were closest to Goya; his wife 'Josefa Bayeu' (Abelló Collection, Madrid), his son 'Javier Goya' (Courtesy of The Metropolitan Museum of Art, Private Collection; Museo de Bellas Artes, Zaragoza) and his best friend and life-long correspondent 'Martin Zapater' (Bilboko Art Eder Museoa / Museo de Bellas Artes de Bilbao). The exhibition also includes the last work Goya ever painted, of his only, beloved grandson 'Mariano Goya' (Meadows Museum, SMU, Dallas) – painted just months before Goya’s death on 16 April, 1828, this portrait is a testament to the genius, skill, and unfaltering creativity of an artist who persevered with his craft to his very last days.

“This exhibition constitutes the best possible survey of portraits by one of the most profound and incisive painters who ever put brush to canvas. Goya’s gaze pierces through outward appearances and reveals human frailty and fortitude, folly and wisdom.”

“We are delighted to support the National Gallery’s 'Goya: The Portraits', which will be the first exhibition to focus solely on Goya’s work as a portraitist and will give visitors a rare opportunity to witness the significant changes that took place in European political and social history as well as its key protagonists during Goya’s long life.”

The above ticket prices include a voluntary donation to the National Gallery. Prices excluding voluntary donation are: Adult £16 Senior (60) £14 Jobseeker/Student/National Art Pass £8, Under 12s – FREE with a paying ticket holder

EXHIBITION ON SCREEN
'Goya: The Portraits' will also screen in cinemas as part of the third season of EXHIBITION ON SCREEN. Filmed exclusively for the big screen in high definition, the film will be released in the UK from 1 December 2015 and then globally in around 40 countries at a later date. For more information visit exhibitiononscreen.com