'Portrait of Doña Isabel de Porcel' has long been heralded as one of Goya’s most dazzling portraits and is amongst the most striking, recognisable and admired paintings in the National Gallery. However, some scholars have recently cast doubts over the attribution of the picture. 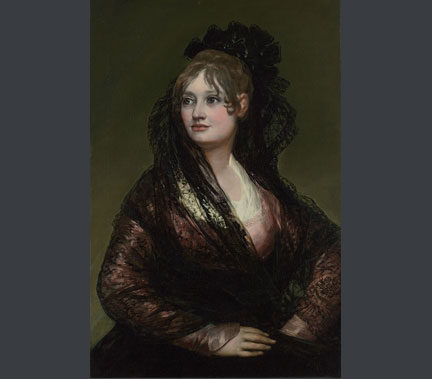 The exhibition Goya: The Portraits (running concurrently in the Sainsbury Wing), which includes around 70 works unquestionably by his hand, provides us with a unique opportunity to look more closely at Portrait of Doña Isabel de Porcel and ask the question: is she really by Goya?

This Room 1 display will present historical information surrounding the portrait and its acquisition by the National Gallery in 1896, together with technical evidence, including an X-ray image which reveals an earlier portrait painted underneath.

Who was Doña Isabel de Porcel?
The sitter has long been identified as Doña Isabel Lobo de Porcel on account of an inscription on the back of the original canvas. Goya exhibited a portrait of Doña Isabel Lobo de Porcel in Madrid in 1805, and this has traditionally been linked to the National Gallery painting. Isabel married Antonio Porcel (Secretary of State for Spain’s American Colonies) in 1802 and the couple had four children. Isabel died in 1842, surviving her husband by 10 years. Antonio, who was a political associate of Goya’s friend and patron Gaspar Melchor de Jovellanos (whose portrait can be seen in 'Goya: The Portraits'), was also painted by Goya in 1806, but his portrait was destroyed by fire in 1953.

The National Gallery’s purchase of 'Portrait of Doña Isabel de Porcel'
The National Gallery bought 'Portrait of Doña Isabel de Porcel' in June 1896 for just over £404. It was among the first pictures by the artist – and the very first portrait by Goya – to enter the National Gallery collection, having made its first Goya purchases (A Picnic and A Scene from ‘The Forcibly Bewitched’) the previous month. The portrait was no longer owned by the sitter’s descendants when the Gallery acquired it, having been sold by the Porcel y Zayas family from Granada, in whose possession it had apparently remained until around 1887, to Don Isidro de Urzáiz Garro (d. 1894). It was from the latter’s heir, Andrés de Urzáiz (1866-1912), that the Gallery acquired the portrait about 10 years later.

A question of attribution
The glamorous sitter is shown wearing a black lace 'mantilla', a traditional headdress which became fashionable among the Spanish aristocracy in the late 18th century. Although painted with tremendous flair, the picture’s brushwork – when compared with Goya’s other portraits – lacks his customary subtlety in describing transparencies and textures. Isabel is extremely charismatic but we struggle to grasp her psychological state – something in which Goya invariably excelled.

The hidden portrait
When an X-ray image was made of the 'Portrait of Doña Isabel de Porcel' during conservation treatment in 1980, another portrait was unexpectedly found underneath. The head and striped jacket of the underlying figure are clearly visible in the X-ray, and 'Doña Isabel de Porcel' was painted directly on top of the initial portrait, without first hiding it with new priming. Although perhaps surprising, this is not unique in Goya’s work. During the period of political upheaval in Spain at the turn of the 19th century, Goya – and other artists – had to be resourceful and adapt to circumstance, recycling canvases as their patrons fell in and out of political favour. 'Doña Isabel de Porcel' must have been painted soon after the underlying portrait, since no dirt is visible between the paint layers of the two figures. A clearer image of the underlying portrait has recently been obtained by using an X-ray fluorescence scanning spectrometer, a cutting-edge piece of analytical technology on loan to the National Gallery through collaboration with Delft University of Technology, which maps the chemical elements in the paint.

“Goya is one of the most admired and imitated painters in the history of art. Pastiches and forgeries of his works proliferated on the European and American art market in the second half of the 19th and early 20th centuries. The technical studies and provenance information regarding the 'Portrait of Doña Isabel de Porcel' are inconclusive so far as Goya’s authorship is concerned, and the attributional status of the painting rests largely on perceptions of quality and on how close it comes to works that are indisputably by the artist – something we all have a unique opportunity to explore during the exhibition ‘Goya: The Portraits’. If it is a pastiche, it has been carried out with such impressive skill that its long-standing attribution to Goya has convinced several generations of specialists and gallery visitors.”