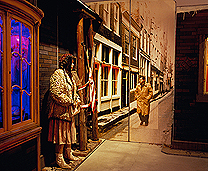 A landmark exhibition at the National Gallery explores the dramatic rise of portraiture in the Renaissance, through the great Masters of Northern and Southern Europe.

In the 15th and 16th centuries, portraits played a vital role in every aspect of human life: childhood, politics, friendship, courtship, marriage, old age and death.

The exhibition provides fresh insights into fundamental issues of likeness, memory and identity while revealing a remarkable community of Renaissance personalities – from princes, envoys and merchants to clergymen, tradesmen and artists.

The exhibition has been organised by the National Gallery, London and the Museo Nacional del Prado, Madrid

The Simon Sainsbury Bequest to the National Gallery

The Simon Sainsbury Bequest is one of the most significant in the National Gallery’s history. This intimate Room 1 display celebrates the arrival of three Impressionist masterpieces to the collection, hung alongside closely related works by Monet and Gauguin that are already firm favourites with visitors.

Sisley in England and Wales

Alfred Sisley (1839–1899) was one of the greatest landscape painters of the 19th century and a leading figure in the Impressionist movement.

He was born in Paris of English parents and always remained a British subject but only twice did he undertake painting campaigns in the UK – in 1874, and again in 1897. This exhibition will bring together these two groups of paintings for the first time. Executed almost a quarter of a century apart, they reveal Sisley at two of the most creative moments
of his life.

The earlier works, dating to the year of the first Impressionist exhibition and created under the excitement and impetus of collective painterly innovation back in France, include depictions of London and the surrounding area.

This vivid series of paintings bears witness to Sisley’s fascination with the busy life of the Thames, both as a working river and as a pleasure ground. The later group, painted with remarkable maturity and bravura skill near the end of the artist’s life, portray the ruggedly beautiful Welsh coastline.

Sisley in England and Wales provides a chance to celebrate this relatively unexplored aspect of the artist’s work, and represents quite a rare phenomenon: two sustained attempts an Impressionist painter to capture the unique qualities of the British landscape.

The exhibition is organised with Amgueddfa Cymru – National Museum Wales, Cardiff, where it will follow from 7 March to 14 June 2008.

Picasso: Challenging the Past

From his earliest years Pablo Picasso (1881–1973) was a passionate student of the grand European painting tradition, frequently visiting the Louvre, the Prado and many other museums for inspiration. The masters of Spanish painting, including El Greco, Velázquez and Goya, were of crucial importance to him, as were Rembrandt, Delacroix, Ingres, Manet and Cézanne.

Picasso pitted himself against each of these painters in a life-long artistic dialogue, taking up their signature themes, techniques and artistic concerns in audacious paintings of his own.

Featuring approximately 60 major works by Picasso, this exhibition explores the many ways in which the greatest painter of the 20th century sought to challenge the Old Masters. The exhibition focuses on enduring themes Picasso confronted throughout his career, with
sections dedicated to the self portrait, the Spanish tradition of the male portrait, the female nude, the still life, the seated female figure, and the artist’s later ‘variations’ on great works of the past such as Manet’s Déjeuner sur l’Herbe.

Sometimes his ‘quotations’ from the Old Masters were direct, at other times highly allusive and inflected by personal concerns; occasionally, they were full of parody and irreverence. Always, Picasso made the implicit case that it was he, in the 20th century, who most forcefully reinvigorated the European tradition.

Reference will be made back and forth between the exhibition and the Gallery’s own incomparable collection of Old Master paintings. In so doing, the exhibition will explore Picasso’s relationship with the art of the past, and show its daring transformation under his brush into ‘something else entirely’.

Picasso: Challenging the Past has been organised in conjunction with the Réunion des Musées Nationaux, the Musée National Picasso, the Musée du Louvre and the Musée d’Orsay.

The only merit I have is to have painted directly from nature with the aim of conveying my impressions in front of the most fugitive effects.
Claude Monet (1840–1926)

In seeking to capture the transient effects of nature in this way, the Impressionists were indebted to a plein-air tradition which had thrived in Western Europe since the late 18th century.

Drawing on the National Gallery’s rich collection of 19th-century French landscapes, this exhibition charts the development of landscape painting from the late 18th century to the year of the first Impressionist exhibition, 1874, and features all the major artists of this genre.

At the end of the 18th century, artists from across Europe were congregating in Rome, before setting out for the Campagna and other picturesque locations. The opening section of the exhibition features works by Jean-Baptiste-Camille Corot alongside Pierre-Henri de  Valenciennes and Simon Denis. Many of the works are drawn from the Gere Collection, which is on long-term loan to the Gallery.

By the first half of the 19th century, artists in France, including Corot and Théodore Rousseau, were also sketching their native scenery to great effect. A major part of the exhibition focuses on the so-called Barbizon School, named after a small town in the Forest of Fontainebleau where landscape artists including Rousseau, Jean-François Millet and Narcisse-Virgilio Diaz de la Peña gathered to work out-of-doors.

Late works by Corot and a selection of beach scenes by Eugène Boudin, the latter displayed alongside Monet’s 'The Beach at Trouville' (1870) and other early works, will trace the tangible influence these artists had on the nascent Impressionists.

The Sacred Made Real: Spanish Painting and Sculpture 1600-1700

While Spanish religious paintings of the 17th century are relatively well known, the country’s polychromed sculptures have never been the subject of a major exhibition. The Sacred Made Real presents a landmark reappraisal of an art form crucial to the development of Spanish art.

The hyper-realistic approach of painters such as Diego Velázquez and Francisco de Zurbarán was clearly informed by their familiarity – and sometimes direct involvement – with sculpture. Francisco Pacheco, Velázquez’s teacher, painted the flesh tones and drapery of many wooden sculptures carved by the celebrated Juan Martínez Montañés. Indeed, Pacheco taught a generation of painters, including Velázquez and Alonso Cano, the skill of painting sculpture as an integral element of their training.

In what will be a unique experience for visitors, these two art forms are to be displayed side by side, inviting a dramatic and entirely natural conversation between sculpture and painting.

The majority of polychromed sculptures were dedicated to key Christian themes commissioned by religious orders, often the Dominicans, Franciscans, Carthusians and Jesuits.

In response to this challenge, Spanish sculptors and painters combined their skills to create arrestingly real depictions of the saints, the Immaculate Conception and the Passion of Christ, each painstakingly carved from wood, gessoed and intricately polychromed. To obtain greater realism, some sculptors such as Pedro de Mena, introduced glass eyes and tears as well as ivory teeth into their sculptures.

And to simulate the effect of coagulated blood on the wounds of Christ, the bark of a cork tree painted red was often employed.

In addition to important canvases by Velázquez, Zurbarán and Cano, the exhibition features sculptures carved by Gregorio Fernández, Juan Martínez Montañés and Pedro de Mena and polychromed by Francisco Pacheco and Alonso Cano.

The Hoerengracht (1983–8), by American artists Ed and Nancy Kienholz, will transform the Sunley Room into a walk-through evocation of Amsterdam’s red-light district.

This highly polemical tableau explores a theme which has been investigated by artists over many centuries and echoes visual traditions that are well established within European art.

Recalling in particular the Dutch masters of the 17th century, the work recreates the glowing windows and mysterious doorways of Amsterdam’s claustrophobic streets – The Hoerengracht’s half-dressed, garishly lit mannequins enact a theatre of grim sociology.

Near to this powerful installation, a small selection of Dutch paintings from the Gallery’s collection will be displayed, including Jan Steen’s 'Interior of an Inn', Schalcken’s 'A Man Offering Gold and Coins to a Girl' and de Hooch’s 'Musical Party in a Courtyard'. These paintings will demonstrate some direct links between the modern world and the past.

The Hoerengracht revisits a theme first tackled by Ed Kienholz in his first environmental sculpture made in 1961, the now legendary Roxy’s. Named after a brothel in Los Angeles, the work has become recognized as marking a seminal moment in the history of installation art.

Made in their Berlin studio, The Hoerengracht shows how the work of the Kienholzes remains a major reference point for contemporary artists such as Mike Kelley, Paul McCarthy, Mike Nelson and Damien Hirst.