Ed Ruscha (born 1937) has shaped the way we see the American landscape over the span of his influential six-decade career. Elegant, highly distilled, and often humorous, Ruscha’s work conveys a unique brand of visual American zen.

This summer, for the very first time in the UK, visitors to the National Gallery have the chance to experience his modern take on the cyclical nature of civilisation – 'Course of Empire.' 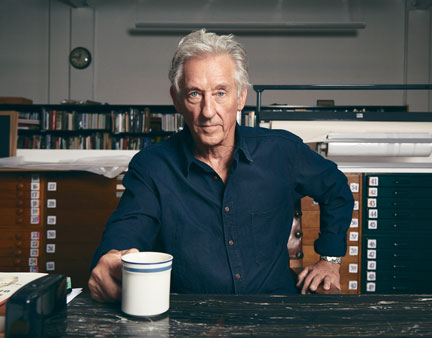 In 2005 Ruscha was invited to exhibit in the US Pavilion at the Venice Biennale. He selected a set of five black-and-white landscapes which he had painted in 1992 called 'Blue Collar Series', all of which feature his home city of Los Angeles. Seven years later he revisited each site, seeing how the buildings had changed in the interim and this time painting them in colour, describing the works as ‘an accelerated, aged version of the same urban landscape.’

Ruscha called the combined series of 10 works 'Course of Empire' in response to a sequence of paintings created by Thomas Cole (1801–1848) in the 1830s, which is concurrently on view at the National Gallery in Thomas Cole: Eden to Empire. This is the first time ever that these two very different approaches to the same subject have been brought together simultaneously at a single institution.

Cole invented a genre of specifically American landscape painting. In 'The Course of Empire' (1833–1836, The New-York Historical Society, New York) he traced the rise, glory, and inevitable destruction of an imaginary civilisation and his series ends in war and destruction. Ruscha also invented a new way of seeing his city and a new American urban landscape tradition. However, unlike Cole’s grandiose vision of the rise and fall of an imaginary classical civilisation, Ruscha’s 'Course of Empire' shows the industrial buildings of Los Angeles – simple, box-like, utilitarian structures with no pretension to beauty, but suggestive of economic impact and global corporate relationships.

Buildings reappear, but after a decade or more has intervened and, for blue-collar workers, things have changed. The functions of the individual structures are now unclear. Tech-Chem has been taken over by Fat Boy, the trade school stands abandoned behind industrial fencing with its windows boarded, the telephone booth has been removed; mobile phones have long since rendered it obsolete.

The viewer examines the landscapes upwards from below ('di sotto in su') so that the buildings seem to recede from them into the implied space of the canvas at exaggerated angles – a great deal of space in each painting is given over to sky, often full of moody, scudding clouds.

“Ruscha has long been fascinated by Thomas Cole’s painting cycle.  Cole used landscape to introduce allegory into American painting and showed how the movement of time could be inscribed into it. Ruscha took up the challenge. Where Cole’s cycle transpires over centuries, only a decade or more separates the pairs of paintings in Ruscha’s ‘Course of Empire’. That the two cycles are, briefly, together in the National Gallery, allows us a unique opportunity to compare how two artists, more than one 140 years apart, approached this related subject.”

This is only the third time that all 10 works have been exhibited together; the first was at the Venice Biennale in 2005, followed by an exhibition in New York in 2006.

In Room 1 of the National Gallery the paintings will be double-hung: the earlier, black-and-white series on the upper register slightly canted forward, its corresponding coloured painting immediately below at eye level. This means each pairing can be compared directly, the implied passage of time between them made immediate. In addition, the double-hang and forward cant will intensify the 'di sotto in su' of the black-and-white pictures; visitors will need to look up, ever so slightly craning their necks, to see them. In traditional European picture galleries – of which, in many ways, the National Gallery is one – paintings often hang on two or more registers. Here, 'Course of Empire' will mimic its Old Master surroundings. We look at industrial Los Angeles as we might 18th-century Venice or London in paintings by Canaletto, which are hanging just a few rooms away.