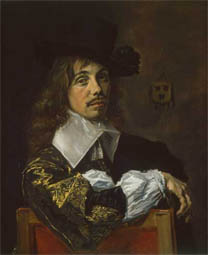 For the first time ever, a major exhibition will trace the development of Dutch portrait painting in the 17th century.

Following its independence from Spain in 1581, the Dutch Republic experienced an era of unprecedented wealth - the 'Golden Age'. Thanks to the successful activities of its merchants and entrepreneurs, a new middle-class elite emerged, which became the dominant force in local government and civic institutions. As a result, these people became the new principal patrons of the arts.

To establish and reinforce their social position, the bourgeoisie regularly commissioned portraits to commemorate the important moments in their lives: births, marriages, and professional and civic appointments. Artists were forced to find new solutions in portrait painting to satisfy the evolving demands of their clientele. The wide body of work they produced is the subject of Dutch Portraits: The Age of Rembrandt and Frans Hals.

The exhibition comprises around 60 works, all painted between 1599 and 1683. Rembrandt and Frans Hals were undoubtedly the greatest masters (the exhibition includes nine works by the former, and a dozen by the latter) but tens, if not hundreds, of other painters also worked in this genre.

Exhibits will range from small portraits meant for the private home to much larger portraits for and about the public sphere. Coming from the Rijksmuseum in Amsterdam is the audacious marriage portrait Hals painted to celebrate the wedding of the wealthy merchant couple Abraham Massa and Beatrix van der Laen.

There will be portraits of family groups ('Willem Kerckhoven and his Family' by Jan Mijtens - Haags Historisch Museum, The Hague), charming portraits of children - like the intimate portrayal of 'The Twins Clara and Aelbert de Bray' by Salomon de Bray from a private collection - and history portraits, such as the splendid 'The Banquet of Cleopatra' by Jan de Bray, one of two loans from the Royal Collection.

One of the six rooms in the exhibition will be given over to a selection of the large-scale group portraits of members of charitable institutions and civic guards. Notable paintings include Thomas de Keyser's dashing 'Loef Vredericx' from the Mauritshuis, which has never been seen in the UK before, and a remarkable militia portrait by Frans Hals and Peter Codde, 'The Meagre Company' (Rijksmuseum, Amsterdam), the largest work in the show at an imposing 209 x 429cm.

An undoubted highlight of Dutch Portraits will be the rare loans of two of Rembrandt's most famous works: 'The Anatomy Lesson of Dr Nicolaes Tulp' (Mauritshuis) and 'The Syndics' (De Staalmeesters) (Rijksmuseum, Amsterdam). The 1632 Anatomy Lesson, featuring Dr Tulp explaining the musculature of the arm to a group of fascinated medical professionals, has not been seen in the UK for more than 40 years. 'The Syndics' - often heralded as the artist's greatest group portrait - was last here in 1992.

'Dutch Portraits: The Age of Rembrandt and Frans Hals' surveys the unprecedented range and variety of painted portraiture in the Netherlands at this time, and gives insights into the fashion, occupations and ambitions of this group of affluent 17th-century individuals.

The exhibition is organised by the National Gallery, London, and the Royal Picture Gallery Mauritshuis, The Hague - where it travels after London (13 October 2007 - 13 January 2008).