When the wartime concerts finished in 1946, Myra Hess expressed her wish that music would one day return to the National Gallery.

It has done so in recent years and – to the delight of those who remember the original story – it has returned in her name.

Every year, Myra Hess Day brings together a warm-hearted audience to celebrate all that the original concerts embodied and achieved. Friends and relatives of Myra Hess attend, along with members of the wartime audience, and a new generation who have been touched by the story. They come to remember the courage, hope and determination that motivated Myra Hess and her team, and to enjoy performances of a concert-hall standard in the intimate settings of the gallery.

The recitals are held in the Barry Rooms, the galleries where Myra Hess used to stage her events. A grand piano is carefully moved into position, among paintings by Reynolds, Hogarth and Canaletto, and the audience gathers to hear great works of classical repertoire performed.

The recitals are of the highest standard, and yet – in keeping with the very special legacy which they commemorate – always a family affair. Friends and relatives of Myra Hess attend, along with members of the wartime audience, and a new generation of fans.

A number of Myra Hess’s pupils – now distinguished pianists themselves – have appeared over the years, including Stephen Kovacevich, the Contiguglia brothers  ̶  Richard and John, and the late Yonty Solomon, who in turn taught the celebrated international pianist, Piers Lane  ̶  Myra Hess’s ‘grandpupil’ and the artistic director of the events.

The modern-day concerts began in 2006, when the Gallery and Jewish Culture UK decided to mark three and a half centuries of British Jewish Life by staging a special tribute to Myra Hess. During the period from 2006 to 2012, the annual Dame Myra Hess Day was generously supported by The Ernest Hecht Charitable Foundation. 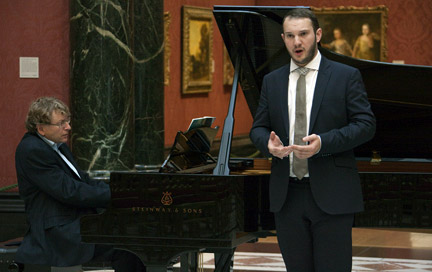