For the musicians as well as their audience the concerts provided relief from the gloomy and frightening news that reached Britain from Europe in the early months of the war. 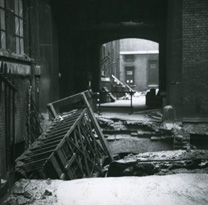 Bomb damage to the courtyard of the National Gallery

Some sense of how worrying the situation was can be gleaned from notes scribbled on the daily running lists for the performances. Across the top of the typewritten pages, Myra Hess maintained a depressing commentary on the progress of the campaign.

On 8 July, after the evacuation of British forces from Dunkirk in late May and the fall of France in late June, Hess wrote ‘Hitler talks of invading Britain’.

Invasion was a constant threat throughout the summer of 1940. Hitler ordered an air offensive on the British Isles to pave the way for an invasion.

Every night Londoners listened to German bombers overhead, on the way to targets in the North of England and wondered when it would be London's turn.

The answer came in late afternoon on 7 September 1940, when around 350 bombers attacked, escorted by more than 600 fighters. The target was the Port of London but many of the bombs fell on nearby residential areas.

By the end of the night, around 450 people were dead. The Battle of Britain had begun.