Image: Detail from Raphael, An Allegory ('Vision of a Knight'), about 1504

Iconography is a branch of art history which studies the identification and interpretation of the content of images. Translated from the Greek it means, literally, ‘image writing’. 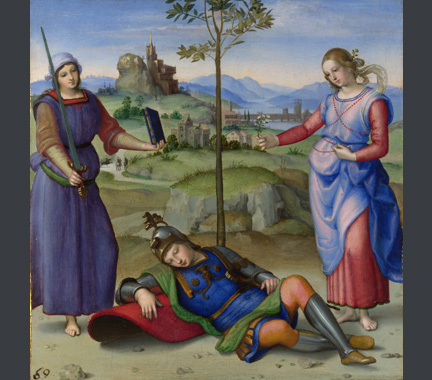 Iconography in the Renaissance

Most religious western art was intended to be seen and understood by as wide an audience as possible. During the Renaissance however, especially in 15th-century painting, iconography became highly sophisticated - in many cases it seems deliberately ambiguous and is often hard to understand.

Secular painting became more common, developing its own traditions and conventions of iconography. These paintings draw upon a vast number of sources, from classical history and mythology, to historical events from the near past. This wide variety of sources often means that the narrative content seems obscure to a modern viewer.

Raphael’s Vision of a Knight shows a young man in armour asleep under a tree,  flanked by two women. One is holding a book and a sword, the other holds a flower. This small picture is an allegorical painting (a figurative representation of an abstract idea).

The most likely source is an allegory about choices taken from a passage in the Punica, an epic poem recounting the Second Punic War by the Latin poet Silius Italicus (AD 25–101).  Resting in the shade of a bay tree, the young soldier Scipio has a vision of two ladies, Virtue and her adversary Pleasure.

In Raphael’s painting, however, the two women are not shown as contestants. Rather than representing the vision as a moral dilemma, Raphael shows Virtue and Pleasure as equal qualities to which an ideal soldier should aspire. Other contemporary texts can be connected with the subject and a variety of sources may have inspired Raphael when he painted his picture.