Image: Detail from Jean-Baptiste-Camille Corot, ‘The Oak in the Valley’, 1871 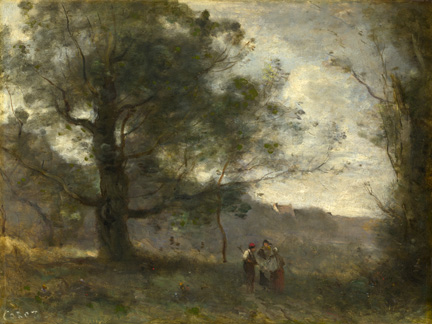 It is painted on very fine canvas, which Corot increasingly favoured in his later years, glue-lined to a second fine canvas. The stretcher is probably original.

The handling, particularly of the tree and foliage, is very typical of Corot’s late style, which was characterised by a wide variation in brushstrokes and brushes, and consistency of paint. The preliminary sketching-in of the trees is visible through the paint and many of the earlier branches, painted in fluid black paint, can be seen under the paint surface. Subsequently, the trunk and most of the branches of the oak tree were picked out in a brown glaze-like paint, a common device of Corot’s at this period. To the right a single thin trunk in the same brown paint is painted on top of all the other paint layers.

The sky has been brought around the tree, and some of the pale blue of the sky is painted over it. Corot often used quite a dry brush, and the lines of the bristles are visible, as in some of this sky paint which he has added over the branches and foliage, for example the pale blue to the top right of the tree. By contrast he has used a thicker paint in the long stroke of blue and white of the sky, added at a late stage, which follows the line of the distant hills.  Here the brush is loaded with thick paint, and the bristles show as textured lines in the paint (fig. 2). 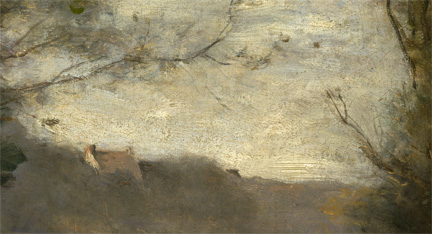 fig. 2 Detail from Jean-Baptiste-Camille Corot, 'The Oak in the Valley', 1871

Corot also used the end of the brush to scratch into the paint, for example in the immediate foreground. However, in many areas the paint is thin, as at the bottom left foreground, where the colour of the ground is visible in many places through the pale brown ébauche (initial sketch). The area to the extreme left is painted very thinly in brown fluid paint, with all the brushstrokes visible. Corot painted the area around the lake and immediately behind the tree in a milky brown tending to mauve and to green around the lake. This colouration results in the pervading silvery tonality characteristic of Corot’s late work.

The ground is white, consisting of lead white extended with china clay or talc, and chalk. Cobalt blue and lead white are present in the sky, and in the dull grey-green of the foreground there are traces of viridian, lead white and red and yellow earths. At a late stage of working Corot added strong olive-green highlights, for example in the tree and along the bottom edge (fig. 3). They are a mixture of emerald green, translucent yellow-brown and earths. 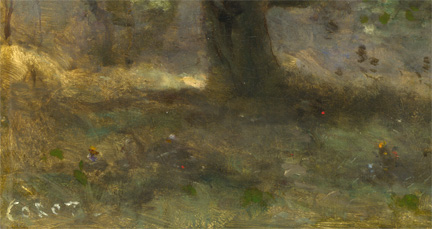 fig. 3 Detail from Jean-Baptiste-Camille Corot, 'The Oak in the Valley', 1871

Medium analysis has shown the presence of walnut oil, linseed oil and heat-bodied walnut oil (in the white impasto of the cloud). Heat-bodying the oil would have ensured more rapid drying, with a smooth glossy surface.

NG6466 has not been treated by the Gallery. It is in generally good condition. The thinness of paint is due to Corot’s original technique rather than to abraded condition. There is, however, substantially discoloured varnish engrained in the texture of the paint.