Director Nicholas Penny introduces this publication in the context of the National Gallery's exhibition 'Building the Picture: Architecture in Italian Renaissance Painting'. 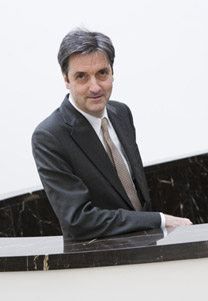 The representation of architecture in painting is a surprisingly neglected field. 'Building the Picture' examines how the large-scale, three-dimensional, inhabited medium of architecture is compressed and encountered in the reduced scale, two-dimensional and fictional world of paintings.

Specifically, the exhibition examines the role of architecture within Italian paintings of the 14th to mid-16th centuries. During this period, stylistic approaches to buildings and paintings underwent radical change. The three great painters who are central to our conception of the Renaissance – Leonardo, Michelangelo and Raphael – combined the theory and practice of architecture with their activity as painters. And they were not alone. Painting and architecture were underpinned by 'disegno'. Only those who were skilled draughtsmen were truly competent to design buildings or make paintings.

Our exhibition is not about buildings on panel or paper that yearn to be real or are on their way to being constructed, but about why painters felt the need to depict buildings and what forms their architectural visions took. It examines parts of paintings that have usually been seen as subordinate to the human figures, and looks at how paintings provided a means of releasing architectural fantasy. In this exhibition, fictive architecture in paintings emerges as a subject in its own right, not as a surrogate for buildings which cannot be displayed in a gallery.

The National Gallery’s Collection is at the heart of this exhibition and has determined the research behind it, but we are very grateful to those lenders who have kindly permitted us to exhibit their precious works in Trafalgar Square: Her Majesty the Queen, The National Trust, The Fitzwilliam Museum, the National Galleries of Scotland, The British Museum, The Courtauld Gallery, and The Devonshire Collection, Chatsworth.

We are indebted to the University of York for releasing Amanda from her teaching responsibilities in order to work on the exhibition, and also to the Arts and Humanities Research Council (AHRC), who awarded Amanda one of their first Fellowships to undertake the necessary research, and to write the majority of the catalogue. I am delighted that the AHRC has shared our enthusiasm for this project. Their generous support has enabled the National Gallery to produce its first online exhibition publication, and a series of short films providing contemporary perspectives on real and imagined architecture. It is also a pleasure to thank the Bernard Sunley Charitable Foundation, and Adam Architecture, for their fundamental assistance in making this exhibition possible.