Philips Wouwerman was famous in his time for his skill at depicting horses in many different situations – at rest in the stable, being shod in the forge, out hunting or, as here, in the frenzy of battle. In what is a relatively small painting – not by Wouwerman himself but produced in his studio – the artist has crammed in at least 14 of them, charging, stumbling, tumbling and wheeling across the canvas.

Despite this crowded field, more than half the picture is taken up with a smoke-filled sky, used to underscore this frozen moment of violence, with a series of dramatic silhouettes of swords, flags, guns and rearing horses.

Wouwerman’s war paintings did not usually depict identifiable conflicts, but another version of this picture (State Hermitage Museum, St Petersburg) has been described as a battle between Poles and Swedes. The horsemen advancing from the left have red flags, coats, hats or capes – a colour associated with Poland – while their opponents, apparently in retreat, seem to wear the blue of Sweden. The two countries were at war from 1655 to 1660.

(Showing 6 of 11 works)
A Dune Landscape with a River and Many Figures
Philips Wouwerman
Wouwerman’s small painting of the Dutch landscape is full of incident: everywhere are little stories to tell, details to pick out. The landscape in the distance seems empty but nearer to us people enliven the scene. Two horsemen studiously ignore the beggars who approach them. They‘re followed by...
Not on display
A Horse being Shod outside a Village Smithy
Philips Wouwerman
Philips Wouwerman was an extremely successful painter in the Netherlands in the seventeenth century and was also a favourite in the eighteenth and nineteenth centuries. His paintings – landscapes with rural scenes being enacted in them – are full of movement, small dramas and incident, capturing...
Not on display
A Stag Hunt
Philips Wouwerman
A group of fashionably dressed aristocrats canter and prance round a stag at bay, threatened by hounds in for the kill. Other riders gallop up or splash through the shallow river to join in the excitement, hat feathers flying and horns whooping. The horses in particular are beautifully painted in...
Not on display
A Stream in the Dunes, with Two Bathers
Philips Wouwerman
Far from the soft, rolling sand dunes at many seaside places, those in Wouwerman’s painting are craggy with rocks here and there. The stark outline of the broken fence against the sky seems forbidding, and the house up on the left bank, gable end facing us, seems to shut us out.Individual parts o...
Not on display 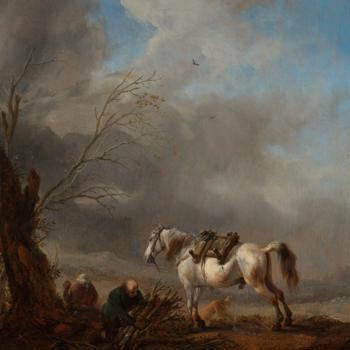 A White Horse, and an Old Man binding Faggots
Philips Wouwerman
Winter threatens in Wouwerman’s little picture. Clouds tower up. An old man crouches in the undergrowth, gathering faggots (twigs bound up to make a fire). Behind him, a woman sits with her back to him, facing the weather and nursing a baby bundled up against the cold. A gnarled tree sheds its fe...
Not on display
Cavalry making a Sortie from a Fort on a Hill
Philips Wouwerman
Philips Wouwerman has captured the violence and cruelty of battle as it was in seventeenth-century Europe, when Holland was closely involved in the wars that raged across the continent. Most of the scene is in shadow, with details picked out in one or two flashes of colour: a horse’s rump, a red...
Not on display
Cavalrymen halted at a Sutler's Booth
Philips Wouwerman
A large tent or booth has been set up on top of a hill above a military camp, next to a blasted tree. They stand upright against a big, luminous sky, together filling nearly half the picture.Dramatic though this backdrop is, it’s the cavalrymen gathered in the foreground whose antics are the main...
Not on display
Seashore with Fishwives offering Fish
Philips Wouwerman
There is a cold grey dawn, but a promise of winter sun as the wind sweeps away the clouds on a Dutch seashore. A young horseman leans down towards a woman kneeling in the shadow of his mount – she holds a large fish up towards him. A patch of light picks out the white apron of a red-cheeked woman...
Not on display
The Interior of a Stable
Philips Wouwerman
Stables were found everywhere in the seventeenth century – but this is no ordinary one. A peacock is perched on a branch at the entrance. Outside, there’s part of a weathered but grand building; birds nest on its roof and climbing plants drift over windows. The entrance and the trees give an air...
Not on display
Two Horsemen at a Gipsy Encampment
Philips Wouwerman
Smoke seems to mingle with the clouds in this dramatic scene of Gypsies round a fire against a background of distant mountains and closer hills. Strong women carry babies slung round them in shawls, and here and there a man’s turban is visible. An old man tends the fire.A woman with a baby on her...
Not on display
Two Vedettes on the Watch by a Stream
Philips Wouwerman
In the Netherlands in the seventeenth century a vedette was a mounted sentry usually placed near an outpost – here, two of them are on watch by a stream. Wouwerman captures their watchfulness by turning their backs to us, making them look in opposite directions and leaning them forward as if they...
Not on display
You've viewed 6 of 11 paintings