In 1891 Gauguin travelled to the South Pacific islands, where he stayed for nearly the rest of his life, mostly on the island of Tahiti. The title of this painting is almost certainly a misunderstanding on the artist's part of the Tahitian word 'fa`ai`ei`e' which means "to beautify, adorn, embellish", in the sense of making oneself beautiful for a special occasion.

In common with many of his other paintings of the period, for example 'Where Do We Come From? What are We? Where are We Going?' of 1897 (Boston, Museum of Fine Arts), Gauguin has used a horizontal format inspired by Javanese sculptured friezes. Some of the individual figures, such as the central woman, are also taken from such friezes. The three women on the left and the horseman reappear in 'Rupe Rupe (Luxury)' of 1899 (Moscow, Pushkin State Museum of Fine Arts).

A Vase of Flowers
Paul Gauguin
Gauguin painted this still life soon after he had arrived in Tahiti for his second and final stay in 1895. Exotic red bougainvillea and hibiscus, white and yellow frangipani, white tiare and large blue leaves burst out of a dark clay pot. They look as though they are slightly past their best, and...
Room 43
Bowl of Fruit and Tankard before a Window
Paul Gauguin
One of Gauguin’s favourite paintings was Cézanne’s Still Life with Compotier, Glass and Apple, (1879–80, Museum of Modern Art, New York), which he acquired for his own collection around 1880.This still life is a homage to that picture, and repeats many of its elements: the fruit, the pottery, the...
Room 43 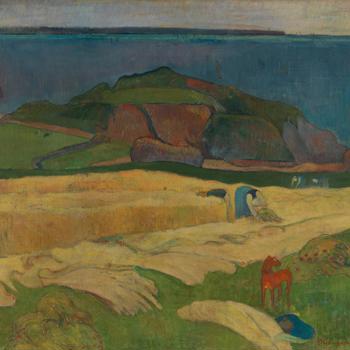