A young man kneels in a prison cell, wearing the robes and horned cap of a doge (the elected head of the Venetian state). On the ground are wooden stocks and heavy chains with manacles from which he has just been freed. Christ empties a cup over the young man’s bowed head. Two angels arrive holding towels and one carries a ceramic jug. Another angel with keys appears in the darkened arch to the right.

It was once thought that this painting showed Christ anointing a doge of Venice in prison. In fact, the young man is Neanias, a duke of Alexandria who later became Saint John, a Christian martyr. Neanias was made duke of Alexandria by the Emperor Diocletian and instructed to suppress the Christian community, but was instead converted to Christianity by a vision. However, his mother betrayed him and he was tortured and imprisoned. Christ appeared to Neanias in his cell, accompanied by angels. He baptised Neanias and gave him the name John.

A young man kneels on the floor of a prison cell. He is wearing a rich cloak, the gold threads of which catch the light, and a cape with three rows of black-tipped ermine tails. He has just been freed from the wooden stocks and heavy chains with manacles that are on the ground. The distinctive red horned cap of a Venetian doge lies next to him. Christ empties a blue and white porcelain cup over the young man’s bowed head. Two angels stand behind Christ; both are holding towels and one also carries a ceramic jug. Another angel carrying keys appears in the darkened arch to the right.

It was once thought that this painting showed Christ anointing a doge of Venice in prison. In fact, the young man is not a doge, but a duke of Alexandria in 300 AD. The Venetians believed their doge’s ceremonial robes to be very ancient, so would not have found it hard to imagine them worn by a duke so long ago.

Neanias, the young son of Theodosia, ruler of Antioch, was made Duke of Alexandria in Egypt by the Emperor Diocletian and instructed to suppress the Christian community there. Neanias was instead converted to Christianity by a vision and urged his mother to join him in his new faith. However, his mother betrayed him to the Emperor. After Neanias was tortured and imprisoned, Christ appeared to him in his cell, accompanied by angels. He baptised Neanias and gave him the name John. He became a martyr after being tortured and beheaded.

The painting now appears very dark because vestiges of a deteriorated dark varnish remain below the present, very yellow varnish. Christ’s blue cloak has probably also darkened and the red lake pigment in his robe may have faded.

The painting was recorded in 1648 in the collection of Gradenica Gradenico, a nun in the convent of S. Daniele in Venice. It was said to show ‘Saint John, Duke of Alexandria, baptised by our Saviour when he was in prison with two angels with towels in their hands.’ The relics of Saint John Martyr were moved from Constantinople to S. Daniele in Venice in 1214, which explains why Gradenica Gradenico would have owned such a painting. The picture dates from about 1565 so it was probably painted for another nun in S. Daniele, perhaps one from the same family as Gradenica, and then passed down to her.

A Pair of Lovers
Paris Bordone
A young couple sit on the grass in a shady glade. The woman’s hair is unbound, and her dress disturbed. In one hand she holds reed pipes, with the other she either restrains her lover or encourages him to move the crimson cloak over her lap. A naked, winged cupid crowns them with a wreath. A wood...
Not on display
Christ as 'The Light of the World'
Paris Bordone
Christ’s hand is raised with his index finger pointing upwards, perhaps towards heaven, represented by the sunlit sky through the window. He holds a scroll inscribed: EGO. SVM. LVX. MŪD. meaning ‘I am the Light of the World’ (John 8: 12). Christ goes on to promise that ‘he who follows me will not...
Not on display 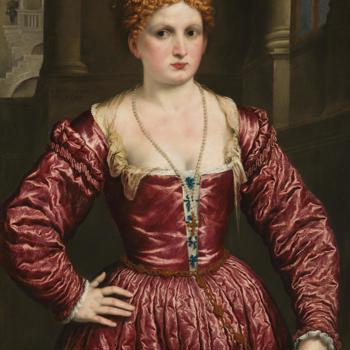 Portrait of a Young Woman
Paris Bordone
A young woman, wearing a crimson robe and pearl necklace from which a gold cross is suspended, stands in an imaginary architectural setting. An opening into what appears to be a brightly lit courtyard reveals a precarious, twisting flight of stairs. A man in a dark costume stands at the top, appa...
Not on display
Portrait of a Young Woman
After Paris Bordone
A young woman gazes provocatively at us. A long gold necklace lies on her flushed chest and loops between her breasts. A red carnation, sprig of thyme and frond of white jasmine are tucked into her chemise, which has slipped from her shoulder to reveal her left breast.Carnations were popular in b...
Not on display