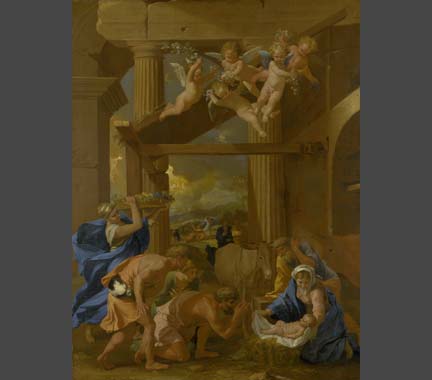 Nicolas Poussin, 'The Adoration of the Shepherds' – 2 mins 49 secs

On the one hand we have these strong vertical and horizontal elements. But if you look at the conflict between the orthogonal on the right – the line moving the eye into the painting with the... just... just above the arch – and then the diagonal of the structure above that... those two diagonal lines are actually in conflict with each other. There’s an uneasy relationship there.

So Poussin teases and plays with those spatial devices. He sets space up almost at the same time as to deny it. Look also at this pediment at the top of the painting, with this orthogonal line moving the eye into the painting underneath the pediment, which conforms to a notion of perspective. And yet that line is continued beyond the pediment to the face of this structure, denying the change in direction. And he’s constantly undermining this.

We also see that the top part of the painting is anchored to the... to the frame on the outside of the painting. But as we move down the painting, this picture plane is actually warped back into space creating enough of a... of a new space for the figures to occur.

Now, in this particular painting, we see a very characteristic orange-brown light that’s pervading throughout the whole painting; that’s very different from our actuality. But in addition to that, we see that Poussin narrows the tonal range and he also narrows the colour range. He removes the extremities of both absolute colour and absolute tone into the centre ground. Now, one can only assume that he’s doing this in order to push the painting back beyond the plane itself – beyond the picture plane itself – so everything is happening at a distance from us, to separate our world from the world which he’s creating.

But beyond that we see of course Poussin as a... as a great classical painter and making very particular constructions, often using classical divisions like the golden section and... and very distinctive vertical and horizontal lines. And in this painting, he’s using the architecture to assert some of those ideas. What’s certain with Poussin is every part has been thought through; every part has been plotted in a very particular spatial construction.

'A master at creating space' – Clive Head looks at Poussin's alternative language of painting. Explore the world on the other side of the canvas.

The Adoration of the Shepherds
Nicolas Poussin
about 1633-4
Tag: Painting
Read more