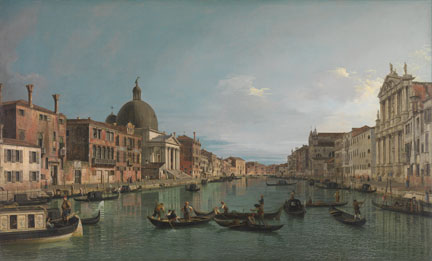 But if we look again, we see in fact that Canaletto is aware of the deadening aspect of that – of pinning the eye into that centre point and not being able to move out from that central location – by gently curving the line between the water and the buildings and also curving the line of the horizon line between the buildings and the sky into a very gentle ellipse. So the eye is encouraged to move across and around the ellipse. And we actually occupy a position on the nearest point of that ellipse.

There’s a tremendous economy in Canaletto’s paint application in certain parts of the painting; the sky clearly has been painted with tremendous speed and with broad brush marks. But as we move across and through the painting we see that Canaletto will, at times, introduce tremendously detailed passages of painting... to the point that, as we look into the details of the buildings, we can see that the lines have actually been applied probably with a pen nib rather than a paintbrush to further add the complexity and density of information.

But Canaletto also is principally concerned with passages of light. And when we consider the date of this painting – what 1740? – it’s tremendously bright and full of light. If we look at the passages of painting, we can see that he splits complimentary colours in order to create light, even in the shadow areas. This essentially is a green- – or blue-green – yellow painting; those colours echo and occur throughout the painting even in the neutral masses on the building. If we look at the passages of painting in the shadow side on the right-hand side, we can see there are little flecks of blue and yellow and brown working together to keep that optical buzz; to keep the freshness of the shadow going and then into that is drawn these heavier passages to assert the form, to assert the architecture.

Clive Head on Canaletto’s skilful manipulation of this view – from the curve of the buildings to the extraordinary brightness of the sky.