A tiger crouches low in thick jungle foliage, its back arched and teeth bared. It is not entirely clear what is happening: is the tiger cowering from the flash of lightning, or is it stalking prey?

Surprised! was the first of around 20 ‘jungle’ paintings that Rousseau produced, which are among his most popular works. These jungles are entirely imaginary: Rousseau never left France, despite his claim that he had served with the French army in Mexico. The foliage is a mix of domestic house plants and tropical varieties, which he had seen at the Botanical Gardens in Paris.

Rousseau was a self-taught amateur artist who took up painting as a hobby. He viewed his painting very seriously, despite facing ridicule from some quarters. But a number of artist and writers, particularly from the avant-garde, hailed him as an important figure. He is now seen as a pioneer of ‘naïve art’.

A tiger crouches low in thick jungle foliage, its back arched and teeth bared. It is not entirely clear what is happening, however. Is the tiger cowering in response to the flash of lightning in the upper right corner, or is it, as is more likely, stalking prey?

Rousseau reworked the canvas, and the darkened areas just above the tall grasses on the right may be traces of prey that was subsequently removed. Several contemporary reviews of the painting mention prey being hunted, and Rousseau himself later referred to the picture as A Tiger Chasing Explorers. The title may even be a play on the French phrase ‘grève surprise’ (lightning strike), linking the tiger’s imminent leap with the simultaneous bolt of lightning. The ambiguity adds an element of mystery to the painting, which may well have been Rousseau’s intention.

This picture was the first of around 20 ‘jungle’ paintings that Rousseau produced during his career. These pictures gave an aura of exoticism to both Rousseau and his art in his lifetime, and they continue to be among his most popular works. Rousseau’s jungles are entirely imaginary, as he never left France. He spent four years in the army from 1863, but his claim that he had served with a French expeditionary force in Mexico in the early 1860s had no basis. The plants, painted in precise detail, are a mixture of domestic house plants and tropical varieties, which he had seen at the Jardin des Plantes (Botanical Gardens) in Paris. Run by the Natural History Museum, the Gardens included a dilapidated zoo (that nonetheless housed lions, tigers and jaguars) and new Zoology Galleries. These Galleries had been built for the 1889 Paris World Fair and included a large collection of stuffed animals in ‘lifelike’ poses. Entry to the Botanical Gardens was free, and Rousseau was a frequent visitor.

This composition is more complex and full of action than any of Rousseau’s previous paintings. It one of his most meticulously worked pictures, with a richly patterned surface made up of dense layers of foliage and vegetation rendered in greens, reds and russet browns, that covers almost the entire canvas. Rousseau worked by completing sections of the canvas in sequence. He also used a pantograph (a mechanical enlarger) that enabled him to trace the outlines of a projected image or object directly onto the canvas. This may explain why the tiger appears awkwardly suspended in space rather than being firmly placed on the ground. With the outlines in place, Rousseau then filled in the design with oil paint.

He covered the completed picture with a mesh of semi-transparent silver-grey stripes to represent rain, which echo the tiger’s stripes and the long blades and leaves. This method of painting rain is similar to Japanese woodblock prints, such as Hiroshige’s Sudden Shower over Shin-Ōhashi Bridge and Atake, which was published in 1857 as part of his One Hundred Famous Views of Edo. Rousseau may have known these prints, as Japanese woodblocks circulated widely in Europe, and were collected by French artists. The tiger itself is a composite of stuffed specimens, zoological and magazine illustrations and the domestic cat. Rousseau may also have seen images of tigers by Eugène Delacroix and Jean-Léon Gérôme, which were often reproduced in prints and photographs.

Rousseau was a self-taught amateur artist – a ‘Sunday’ painter – who took up painting as a hobby, claiming he had ‘no teacher other than nature.’ His job at the Paris Customs Office was the source of his nickname, ‘Douanier’ (customs inspector), although he never in fact made the rank of inspector. His lack of knowledge of perspective is evident in the flatness and lack of three-dimensional modelling in his paintings. However, Rousseau took his painting very seriously, despite facing ridicule from some quarters. A number of artist and writers, particularly from the avant-garde, hailed him as an important figure. Among these was the young Pablo Picasso, who not only bought a portrait by Rousseau but who also, in December 1908, organised a ceremonial banquet in his honour, which was attended by many of Paris’s leading cultural figures. Addressing Picasso at the banquet, Rousseau asserted, ‘You and I are the two most important artists of the age – you in the Egyptian style, and I in the modern one.’ Today, Rousseau is regarded as a pioneer of ‘naïve art’, a term used to describe art produced by artists with no formal artistic training. Its childlike simplicity and sometimes crude technique are often seen as a sign of its authenticity of expression.

Surprised! was exhibited at the Salon des Indépendants of 1891. Established in Paris in 1884 under the slogan, ‘without jury nor reward’, the Salon des Indépendants was a response to the narrow traditionalism of the official, government-sponsored Salon. Odilon Redon, Georges Seurat and Paul Signac were among its founder members, and Rousseau would regularly exhibit at its annual show. His submission of Surprised! to the 1891 Salon prompted the first serious critical response to his work. Writing in The Swiss Journal, a young writer and artist, Félix Vallaton, had no doubts concerning Rousseau’s earnestness or his ability: ‘His tiger … ought not to be missed: it is the alpha and omega of painting … As a matter of fact, not everyone laughs, and some who do are quickly brought up short. There is always something beautiful about seeing a faith, any faith, so pitilessly expressed. For my part, I have sincere esteem for such efforts, and I would a hundred times rather them than the deplorable mistakes nearby.’ 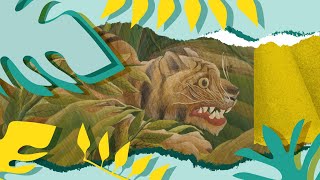 Watch along as Bethan, one of our Educators, creates a jungle-inspired work of art using just materials you can find at home.