Godfried Schalcken, A Woman singing and a Man with a Cittern

This painting sets out to tease us: we are clearly invited to wonder about the nature of the relationship between the two figures. They sit close and seem deeply comfortable in each other’s presence; there is a hint of embarrassment in the young woman’s reaction to our gaze. She looks up slightly startled. While she meets our eye, she does not seem comfortable with our presence.

Schalcken does offer some subtle suggestions as to the nature of their relationship. A painting in the background shows a pair of naked legs. In the foreground, the artist has gone to great trouble to depict the sensuous silk, velvet, fur and lace of the young woman’s coat and dress, and also her glowing cheek, bare arms, neck and cleavage. The pink rose on the table also signals romantic love. As with any flirtation, nothing is certain, but the hints are there.

This painting sets out to tease us: we are clearly invited to wonder about the nature of the relationship between the two figures. They sit close. They seem deeply comfortable in each other’s presence. The sense of harmony is even echoed by their mirrored body language – each has one hand raised and the other lowered.

Our gaze has disturbed this harmony, and we are left to puzzle over the young woman’s reaction to us. She looks up as though startled, her lips slightly apart. While she meets our eye, she does not seem comfortable with our presence. We might detect a sense of embarrassment, of guilt even. Perhaps her raised hand is a defensive reaction to being discovered in this intimate situation. But perhaps not. Her parted lips could indicate that she is singing a note for her partner to tune to and her hand is raised to help her concentrate as she does so.

While he leaves these questions open, Schalcken has included one or two clues which might tempt us to resolve them. The painting hanging on the wall lies in deep shadow, but we can just make out a pair of naked legs in it. Schalcken has gone to great trouble to demonstrate his skill in depicting the sensuousness of the silk, velvet, fur and lace of the woman’s coat and dress – but what really catches the light are her glowing cheek, bare arms, neck and cleavage.

We know also that Schalcken’s customers were predisposed to enjoy uncertainty of this kind. Scenes of music making were a popular genre in seventeenth-century Holland. Sometimes the theme was obviously bawdy, sometimes apparently innocent, sometimes – as here – more uncertain. But part of the reason they were popular was because of these tensions, and in that they reflected real life. Musical gatherings were perfectly respectable social activities, and were considered a good way for young people to meet. There was always potential for flirtation, and even casual relationships.

However we decide to interpret the scene, this would not have been a portrait of a real couple in a real situation. We can be sure of that because of the setting. The massive column and swagged curtain in the background is stylised rather than realistic. The painted arch at the top of the painting also adds to a sense of artifice. Schalcken probably borrowed this particular device from his teacher, Gerrit Dou, who made a series of ‘niche’ paintings set in architectural frames.

A Woman singing and a Man with a Cittern
Godfried Schalcken

A Man Offering Gold and Coins to a Girl
Godfried Schalcken
A man offers gold coins and jewellery to woman lying on a bed – a carving of Cupid, the god of erotic love, on the bedpost in the foreground removes any doubt that it is an amorous encounter. The glass of wine would also have been associated with licentious behaviour. Whether this is a transactio...
Not on display
Allegory of Virtue and Riches
Godfried Schalcken
A small, beady-eyed sparrow on one side of a set of scales heavily outweighs the gold and pearls which a weeping woman, two tears glistening on her cheeks, places in the other. Clearly, in the real word, this couldn't happen: the bird would be much the lighter than the jewellery. But this picture...
Not on display 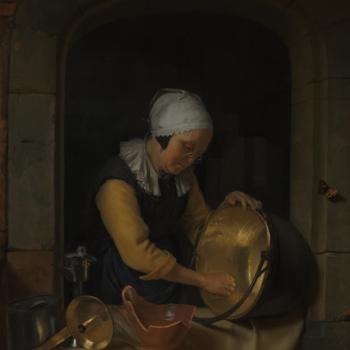 An Old Woman scouring a Pot
Godfried Schalcken
This painting evokes a sense of the calm and simplicity of everyday routine and of the virtue of labour as the old woman absorbs herself in polishing the glowing brass of a large pan. But other objects on the sill give her scouring a different, darker significance and clearly identify the picture...
Room 27