Frans Hals, Portrait of a Woman with a Fan

Key facts
Portrait of a Woman with a Fan
Frans Hals
/

This painting demonstrates Frans Hals’s gift for creating lively and animated portraits that suggest distinctive personalities. We don't know who the woman in this compelling work is, but her elegant dress and jewellery indicate that, like many of Hals’s patrons, she may have been the wife of a wealthy citizen of Haarlem.

Hals has paid great attention to the detail of her costume, which is characteristic of the period around 1640, when this picture was probably painted. She holds an expensive fan made of feathers, set in a gold mount and suspended from a gold chain. This object functions as a status symbol but also serves to give the woman’s pose movement. She pulls playfully on the chain with one hand and holds the fan’s mount delicately between the thumb and ring finger of the other – a position that could change momentarily.

This painting demonstrates Frans Hals’s gift for creating lively and animated portraits that suggest distinctive personalities, even though the sitter’s identity remains a mystery. Painted life-size in three-quarter-length, she stands against a monochrome beige-brown background and looks directly at us. Bright light falls on her even face and her hands, and she holds a fan made of feathers, set in a gold mount and suspended from a golden chain. The elegant dress and jewellery suggest that the woman, like many of Hals’s patrons, may have been the wife of a wealthy citizen of Haarlem.

Hals has paid great attention to the detail of this woman’s elegant clothing. She wears wide lace-trimmed cuffs and a large, flat, three-tiered collar decorated with a silver bow. Elaborate collars like this began to replace older types in about 1640, when this picture was probably painted. This is supported by the Portrait of a Man, a Woman and a Boy in a Room by Pieter Codde, dated 1640, in which the woman wears a very similar costume. And there is an even closer similarity to the costume depicted in Portrait of a Woman, also of 1640, by Johannes Cornelisz. Verspronck, Hals’s Haarlem colleague and possible pupil (Rijksmuseum Twenthe, Enschede). In Verspronck’s painting, the lace collar and cuffs as well as the silver bow virtually replicate those worn by Hals’s sitter.

Fans began to appear in portraits in the 1630s, but they were in fashion in the Netherlands much earlier. The one depicted here was the most popular type and, like all kinds of fans, was expensive. But Hals didn't just use this fan to convey the sitter’s status: it serves to give the picture movement. Rather than just resting her hands on the fan, the woman pulls playfully on the gold chain and holds the mount delicately between her thumb and ring finger – a position that could change momentarily.

The way the woman’s right hand and fan are cropped and the way she seemingly crowds the frame is unusual and might suggest that the painting has been cut at the bottom edge and sides.

Portrait of a Woman with a Fan
Frans Hals

(Showing 6 of 7 works)
A Family Group in a Landscape
Frans Hals
We are looking at a family group, a mother and father surrounded by their seven children with a nursemaid holding the latest baby. There are two centres of attention among the sitters, formed around the two youngest children – just what you might expect in a large family.These poses and interacti...
Room 23
Portrait of a Man holding Gloves
Frans Hals
The sitter in this portrait is clearly a prosperous man, conventionally but expensively dressed in the style of the mid-1640s. Beyond that, no evidence has survived – we don’t know who he is. Nevertheless, this portrait is a good example of Hals’s ability both to capture a convincing likeness and...
Room 23
Portrait of a Man in his Thirties
Frans Hals
An unknown sitter leans slightly backwards. It’s an unconventional pose, but one which gives a strong impression of immediacy and informality: he seems to have pushed back his chair and turned towards us. The sense of spontaneity is enhanced by the way Hals has manipulated our gaze. His concern w...
Not on display 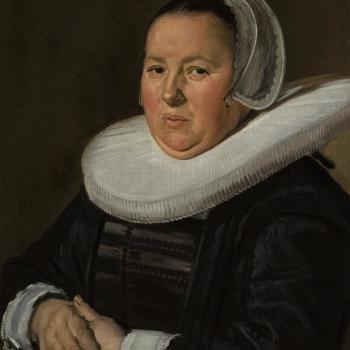 Portrait of a Middle-Aged Woman with Hands Folded
Frans Hals
The sitter looms out of this painting in a rather imposing way, filling much more of the picture space than do the figures in most of Hals’s portraits. However, since it was first made, the picture seems to have been cut down at the sides and the bottom, amplifying the sense of the sitter’s size...
Room 23
Portrait of a Woman (Marie Larp?)
Frans Hals
An eighteenth-century label stuck on the back of this painting names the sitter as Marie Larp, and there was a Maria Larp living in Haarlem around the time the portrait was made. She married Pieter Tjarck in 1634, whom Hals also seems to have painted in a portrait now in the Los Angeles County Mu...
Room 23
Portrait of Jean de la Chambre at the Age of 33
Frans Hals
Holding a quill in his right hand, the man in this portrait has turned his head towards us, creating the feeling that we have just interrupted his work. He gives us a questioning look, as if he is waiting for an explanation for the interruption. The sitter is Jean de la Chambre (1605/6–1668), a d...
Room 25
Young Man holding a Skull (Vanitas)
Frans Hals
A life-size figure stands before us, holding a skull in one hand and gesticulating with the other. Although he faces us frontally he looks to his left, and it is the gesture of his right hand that focuses us: his fingers seem to project out from the canvas into our space.This is one of Hals’s mos...
Room 25
You've viewed 6 of 7 paintings