Irises were among Monet’s favourite flowers, and he cultivated many different species, planting them in both his flower garden and his water garden. This is one of approximately 20 views or irises surrounding the banks of the lily pond that Monet painted around 1914–17. It is as though we are standing on the Japanese bridge and looking down at the winding path bordered by flowers.

The painting was evidently rapidly executed, with the garden path laid in first and the flower border worked over its edges. The white ground is left uncovered in places and the brushwork is loose, with the thick purples, blues and greens applied with bold, even crude strokes. The effects may have been partly the result of the double cataracts, which at this date were altering Monet’s vision. It is not clear whether the artist regarded the picture as finished, since it remained in his studio at his death.

By the late nineteenth century hybridisation had created almost 200 different varieties of iris. The flowers had originated in Japan and featured in the Japanese prints Monet so admired – we know that he owned a print of Irises by the Japanese artist Hokusai. He would also have been familiar with the paintings of irises that Van Gogh made in the year before his death in 1890. Monet cultivated many different varieties of iris, and in 1913 his head gardener even published an article in a horticultural magazine detailing the different types that grew in the garden, including one that was named ‘Mme Claude Monet’, after Monet’s wife.

Irises were planted beneath the trees in the ‘Clos Normand’ flower garden in front of Monet’s house and around the banks and along the paths of the lily pond in his water garden. Clumps of them can be seen bordering the pond in an earlier view of the water garden, The Water-lily pond. The irises made an impressive sight. Georges Truffaut, a great horticultural expert who visited Giverny, wrote: ‘The edges of the pond are thickly covered with irises of every kind. In the spring there are Iris sibirica and Virginian irises with their long petals and velvety texture; later on the Japanese irises and the Kaempferi irises grow here in quantity.’

This painting is one of approximately 20 views of irises in the water garden that Monet painted around 1914–17. One striking characteristic of these canvases is the experimentation with unusual and unexpected viewpoints. It looks as though the bird’s-eye view here is painted from a vantage point on the Japanese bridge.

Most of the iris pictures of this date are exactly two metres high, the same height as Water-Lilies, the large panel also in the National Gallery’s collection. The pictures were painted in the large studio Monet had built at Giverny in order to work on huge canvases of his water garden. The National Gallery’s iris painting was rapidly executed, with the garden path laid in first and the flower border worked over its edges. The most fluid section is the swirling blues and greens in the lower right corner. Like Water-Lilies, it is painted on a luminous white ground, which is left uncovered in places, particularly in the lower right corner and along the lower edge, and the brushwork is very loose and open at the right edge of the picture. Monet applied thick purples, blues and greens using bold, even crude strokes. The effects may have been partly the result of the double cataracts which were altering his vision by this date.

It is not clear whether Monet regarded the picture as finished since it remained in his studio (along with Water-Lilies) at his death. It is possible that the large pictures of irises were intended as studies, and that Monet may at one point have been thinking of including irises in his Grandes Dėcorations series of paintings of the water-lily pond. The final series, which he donated to the French state, and which is now on show in the Musėe de l’Orangerie in Paris, does not include irises, but a photograph taken in 1920 of the Grandes Dėcorations in progress suggests that Monet may have considered featuring them in the scheme.

(Showing 6 of 17 works)
Bathers at La Grenouillère
Claude Monet
During the summer of 1869, Monet and Renoir painted together at La Grenouillère, a slightly raffish resort on the river Seine some 12 kilometres west of Paris. It had become a popular weekend retreat from the city during the 1860s.Monet made several oil sketches at the resort, including this pict...
Room 41
Flood Waters
Claude Monet
Torrential rain in autumn 1896 caused extensive flooding near Monet’s home in Giverny. The river Epte, a tributary of the Seine, burst its banks and overflowed into the meadow next to Monet’s garden.Obliged to remain close to home, Monet painted the view of the waterlogged landscape that he saw i...
Room 44
La Pointe de la Hève, Sainte-Adresse
Claude Monet
Monet was in his early twenties when he painted this view across the breakwaters to the headland of La Hève, near Sainte-Adresse on the Normandy coast. He knew the area well, as he had spent his childhood in nearby Le Havre. The picture was probably made on the spot as a study for a larger studio...
Room 44
Lavacourt under Snow
Claude Monet
Snow scenes were a particular favourite among the Impressionists, and Monet painted several canvases that explore the way sunlight plays upon the snow, reflecting tones of red, pink, purple and blue at different times of day. He produced this scene of Lavacourt, a tiny hamlet on a bend in the Sei...
On display elsewhere
Poplars on the Epte
Claude Monet
Not on display
Snow Scene at Argenteuil
Claude Monet
In 1871 Monet moved with his family to Argenteuil, a suburb north-west of Paris. During his six-year stay there he painted around 200 pictures of the town and its surroundings. This picture is one of 18 Argenteuil canvases that record the snowy winter of 1874/5. The figures trudging along the roa...
Room 41 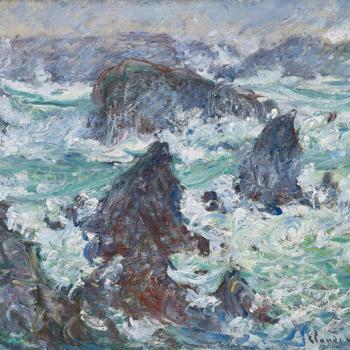 Storm at Belle-Ile
Claude Monet
Room 44
The Beach at Trouville
Claude Monet
Monet’s earlier paintings of the Normandy coast had emphasised it as a working seascape, peopled with fishermen who had to contend with a cold climate, choppy seas and stormy skies. But this painting and the eight others he made in the summer of 1870 show it as a holiday destination, with wide sa...
Room 44
The Gare St-Lazare
Claude Monet
This painting is one of a dozen views of the Gare Saint-Lazare that Monet painted in early 1877. He had known the station since his childhood, and it was also the terminal for trains to many of the key Impressionist sites west of Paris.One of the less finished paintings of the group, it is the mo...
On display elsewhere
The Museum at Le Havre
Claude Monet
During the 1870s when he was living at Argenteuil, on the outskirts of Paris, Monet made several trips back to Le Havre, where he had grown up. The city was a thriving commercial and industrial centre, and France’s most important transatlantic port, with a series of harbours and busy docks. For...
Room 41
The Petit Bras of the Seine at Argenteuil
Claude Monet
In 1871 Monet settled in Argenteuil, a small suburban town on the Seine just nine kilometres and a fifteen-minute train journey from Paris. Already partially industrialised, Argenteuil was also famous as a centre for pleasure boating, and Monet was particularly attracted by its regattas and sail...
Room 44
The Seine at Port-Villez
Claude Monet
Not on display
The Thames below Westminster
Claude Monet
Monet was captivated by London’s fog during his first stay in the capital from 1870 to 1871. Later in life he told the art dealer Rene Gimpel: ‘Without the fog, London would not be a beautiful city. It’s the fog that gives it its magnificent breadth.’ This misty composition is anchored by carefu...
Room 44
The Water-Lily Pond
Claude Monet
In 1893 Monet bought a plot of land next to his house in Giverny. He had already planted a colourful flower garden, but now he wanted to create a water garden ‘both for the pleasure of the eye and for the purpose of having subjects to paint'. He enlarged the existing pond, filling it with exotic...
Room 41
Water-Lilies
Claude Monet
In 1916 Monet had a new studio built at his home in Giverny in order to work on huge canvases of his water-lily pond, each of them more than two metres high. These monumental paintings were intended to form an entire decorative scheme, and he donated 22 of them to the French state after the Firs...
Room 41
Water-Lilies, Setting Sun
Claude Monet
During the final two decades of his life Monet devoted himself to painting the water garden he had created at his home in Giverny, producing around 250 innovative canvases. His paintings became increasingly experimental as he gradually abandoned depictions of the banks of the pond, its Japanese b...
Room 41
Woman Seated on a Bench
Claude Monet
Not on display
You've viewed 6 of 17 paintings